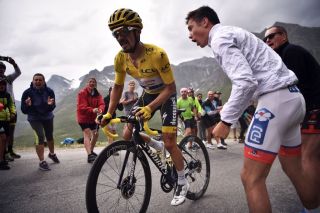 French minister for sport Roxana Maracineanu has said that the 2020 Tour de France will not be held behind closed doors if it goes ahead as currently scheduled from August 29 to September 20.

Fresh doubts were cast on the feasibility of holding the 2020 Tour this week after French prime minister Edouard Philippe announced the prohibition of public gatherings of 5,000 people or more until September due to the coronavirus pandemic.

The French ministry for sport later stated that this announcement did not rule out the prospect of the 2020 Tour getting underway on August 29 as planned, but it nonetheless saw the UCI opt to delay unveiling its revised 2020 calendar until next week.

Speaking to RMC radio on Thursday evening, Maracineanu acknowledged that it would be "a little while" before sporting competition could resume but she said that both the Tour and the Roland Garros tennis tournament could be held in September if the situation in France improves in the meantime.

"We're going to have to be patient, move forward carefully and not make overly ambitious plans," Maracineau said. "If, in September, things go even better, all the events on the calendar, such as the Tour de France, Roland Garros, or other major events, could be held.

"These two events require spectators: for the box office at Roland Garros, for joy and excitement at the Tour de France. They will only be held if there is authorisation for the public to be there. They will not be held behind closed doors."

The 2019-2020 French football season was formally ended this week following the extension of the ban on public gatherings of 5,000 people or more, while in cycling, the French national championships, due to take place in Plumelec the week before the Tour, look set to be cancelled.

Maracineanu suggested, however, that smaller sporting events could be held behind closed doors in August before the limits on public gatherings are lifted. The Bretagne Classic organisers in Plouay (August 25) are exploring plans to limit the attendance at the finish to 3,000 ticketed spectators, while ASO were understood to be planning to hold a reduced version of the Critérium du Dauphiné in August ahead of the postponed Tour de France.

"In August, there might be competitions held behind closed doors to respect the 5,000-person rule," Maracineau said, though she warned that the nature of the COVID-19 pandemic meant that there could be no certainty regarding future plans for the sporting calendar.

"My role as minister for sport is to be optimistic and reassuring but also cautious and realistic. The reality is going to be whatever the curve of the pandemic imposes on us. I can’t have any certainty. It’s too early to say whether the Tour de France will be postponed or cancelled. We’re discussing it very regularly with the organiser ASO. It will be up to them to tell us the date when a decision has to be taken."