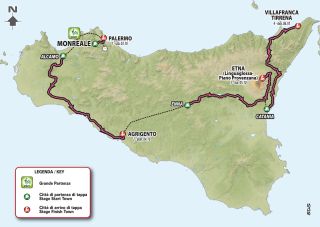 The rescheduled 2020 Giro d’Italia will get underway with four stages in Sicily, beginning on Saturday October 3 with a fast 16km individual time trial from the cathedral at Monreale into the heart of Palermo.

The Grande Partenza was originally due to take place in Budapest in May, but the three stages in Hungary were removed from the route following the postponement of the Giro due to the coronavirus pandemic. The 2020 Corsa Rosa will take place from October 3-25.

On Friday, RCS Sport confirmed that it has replaced the opening Budapest time trial with a test of a similar distance to Palermo, ending a local polemic about which Sicilian towns and villages would host the Grande Partenza. The Giro will then continue with the three Sicilian stages that were already due to feature as stages 4, 5 and 6 on the route that was unveiled last winter.

2020 Giro d'Italia likely to start with time trial in Palermo

Sicily hosted the Giro start for the first time in 1930 and the Grand Partenza has taken place on the island nine times in total, most recently in 2008, when Slipstream-Chipotle won the opening team time trial in Palermo.

In recent years, the Giro has been a frequent visitor to Sicily, while RCS Sport inaugurated a new four-day Giro di Sicilia in 2019. Sicily was already due to host the Grande Partenza in 2021, but that has now been brought forward to October, when the region will host the opening four stages.

“We immediately accepted the invitation of RCS Sport to bring the Grande Partenza forward from 2021 to 2020 because we also believe that the seasonal adjustment is fundamental for us,” said Manlio Messina, Councillor for Sport, Tourism and Entertainment of the Sicilian Region. “We are proud to be part of this project which I am sure will drive the development of sport and tourism.”

The 2020 Giro will thus get underway beneath the stunning Norman cathedral at Monreale, famed for its mosaic interior. Monreale stands on the slopes of Monte Caputo, overlooking Palermo, and so the time trial course will be a fast one as riders drop towards the city centre.

“It will be a very interesting challenge because you start off downhill,” Giovanni Visconti (Vini Zabù-KTM) told Il Corriere della Sera. “It’s a time trial to be raced at 60kph with several corners to manage in the finales. The specialists will be the favourites: you need a lot of power and bike handling.”

Stage 2 will start from Alcamo (rather than Monreale as originally planned) and will take the gruppo on a rolling route to Agrigento and the striking Valley of the Temples.

Agrigento hosted the 1994 World Championships and was also the scene of a Riccardo Riccò stage win at the 2008 Giro. A similar uphill finale is envisaged this time, with RCS Sport describing it as a “finisseur final.”

The first mountaintop finish of the Giro comes on stage 3, which brings the race from Enna to the summit of Mount Etna. It will be the Giro’s third visit to the volcano in four years, and riders will tackle the summit at Piano Provenzana from a new approach from Linguaglossa. The 18.2km ascent has an average gradient of 6.8% with ramps of 11% near the summit.

The fourth and final stage in Sicily is 138km in length from Catania to Villafranca Tirrena. Although the 1125m-high climb of Portella Mandrazzi features midway through the stage, the sprinters will be expected to have their first opportunity at the finish.

The Giro caravan will then make the ferry crossing to Calabria ahead of stage 5, which is expected to replicate stage 7 on the original route and bring the race from Mileto to Camigliatello Silano.

The revised 2020 Giro route is expected to presented in full in the coming days, and Il Corriere della Sera reports that a stage to the striking city of Matera and a summit finish in the Apennines of Abruzzo will be included on the route to replace the two road race stages that were originally scheduled for Hungary in May.

No revisions are expected to the second half of the route, where many of the key stages fall on weekends. The final weekend of the Giro will see a summit finish at Sestriere before the concluding time trial in Milan on October 25 – which could prove to be something of a ‘Super Sunday,’ given that Paris-Roubaix and the Vuelta a España summit finish at the Col du Tourmalet are scheduled for the same day.

Cyclingnews will have full coverage of the Giro d'Italia with reporters at every stage of the race.