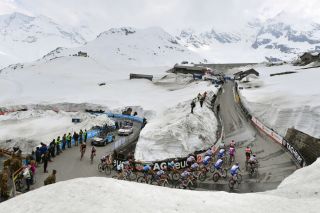 Mauro Vegni has confirmed that the rescheduled 2020 Giro d’Italia will start in Italy rather than in Hungary, stating that RCS Sport is assessing two locations in southern Italy for the Grande Partenza.

"We’re studying two hypotheses for the new start of the Giro d’Italia, both in the south – and they are not necessarily in Sicily," Vegni said, according to La Repubblica. "At the moment, it’s complicated to speak with regional governments. We’ll look to confirm the start within a couple of weeks."

The Giro, which was postponed due to the coronavirus pandemic, was originally due to start in Budapest this coming Saturday before transferring to Sicily ahead of stage 4. On Tuesday, the UCI announced that the Giro has been rescheduled for October 3-25 as part of its revised calendar of Autumn racing.

In a statement on Tuesday afternoon, RCS Sport tempered its satisfaction at plans to resume the season by pointing out that it had proposed alternative dates with fewer clashes between WorldTour races.

The postponed 2020 Giro is set to overlap with the Vuelta a España (October 20-November 8) and it will also clash with no fewer than three Monument Classics – Liège-Bastogne-Liège (October 4), the Tour of Flanders (October 11) and Paris-Roubaix (October 25).

"The publication of the calendar by the UCI is an important step forward that certainly helps all the stakeholders involved to reprogram the season. It is the result of an unparalleled extensive work involving the institutions, organizations, teams and others who, in their various capacities, have contributed to this difficult choice," read RCS Sport’s carefully worded communiqué.

"In order to save and safeguard the important heritage of cycling races, some sacrifices had to be made considering the short time span within which we could include all the season’s races. We made a number of alternative proposals which, in our opinion, would have resulted in reduced overlaps among races in the calendar. These proposals have not been adopted. However, we believe this result is important for the restart, especially at this time, given the dramatic health situation that is affecting all areas of our lives."

The men’s and women’s WorldTours are slated to resume on August 1 with an RCS Sport event, Strade Bianche, while Milan-San Remo has been fixed for August 8. Tirreno-Adriatico will take place from September 7-14, thus overlapping with the second week of the Tour de France, while Il Lombardia has been set for October 31, six days after the projected Giro finish in Milan. "For us, the essential thing was to have a calendar to start putting events in place," Vegni said.