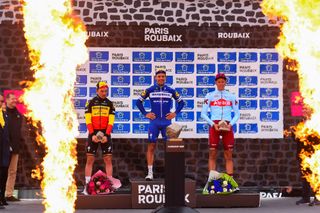 In a perfect world, the hardened men of the Classics would be tapering and honing their cobble riding skills to get ready for Paris-Roubaix this weekend. Since the COVID-19 pandemic has halted the racing, Cyclingnews readers will determine which of the past 30 editions of the race was the best.

Read back through the links of each of the editions to refresh your memory of the drama, tactics, bad luck and triumph over the past 30 years. Spoiler alert - they're all great races!

We scrambled the numbers 1 through 30 using an online number generator to assign a random order to the 1990 to 2019 editions of the race, then grouped the editions by this order into eight heats for Round 1 of voting.

Semifinals will take place on Friday, April 10, with the final vote going through the weekend ending approximately when Paris-Roubaix would have ended this year - 1600 BST.

Round 1 of voting for #CNBestRoubaix - Pick your favorite editions of Paris-Roubaix from the last 30 yearshttps://t.co/jvZsKjWlMo Heat A pic.twitter.com/bjZfdM0ocFApril 8, 2020