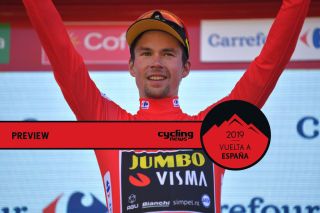 How do you solve a problem like Primoz Roglic? The Slovenian has looked impregnable on all terrains on this Vuelta a España, dominating the time trial in Pau and then swatting away the climbers on the viciously steep haul up Los Machucos. His overall lead is as hefty as his Jumbo-Visma team is strong. It seems increasingly difficult to picture anyone else wearing the maillot rojo on the Paseo del Prado on September 15.

The morale of men like Alejandro Valverde, Nairo Quintana (Movistar) and Miguel Angel Lopez (Astana) appears to be ebbing away in the face of Roglic’s supremacy, but they have not yet run out of road. For better or for ill, there is still over a week of this Vuelta remaining, and a litany of climbs to boot, starting with a double-header of mountain stages in Asturias that will set the tone for the final week of the race.

Roglic is far too reserved to ever show it, but he must have felt as though he could already see Madrid from the summit of Los Machucos on Friday evening. If he emerges from Asturias with that advantage intact – or enlarged – then Ljubljana city council may as well start assembling the stage for the homecoming party. If, on the other hand, he displays hitherto unseen signs of weakness, it would offer some much-needed sustenance to Movistar, Lopez and, of course, an effervescent Tadej Pogacar (UAE Team Emirates) ahead of the final week.

The Vuelta’s foray into the mountains of Asturias begins with Sunday’s stage 15 from Tineo to a summit finish at the Santuario del Acebo. The name is familiar, but the finale is a novel one. The Alto del Acebo is a staple of the Vuelta a Asturias, and Quintana won at the summit in 2017, but the Vuelta breaks new ground when it climbs the ascent from a previously unused side for Sunday’s finale.

The 154.4km stage is centred around the verdant mountains of the Sierra del Acebo and takes in four category 1 ascents, starting with the Puerto del Acebo, which grinds upwards for 8.2km at an average gradient of 7.1%. Next up is the slightly gentler Puerto del Connio (11.7km at 6.2%), while the wearing-down process continues with the dramatically named Puerto del Pozo de las Mujeres Muertas (11.3km at 10.8%). The ‘Mountain of the Well of the Dead Women’ has sustained gradients of 10% at its base, and while the road flattens out around the midpoint, it kicks up again thereafter, with a succession of 9% ramps near the summit, which comes 40km from the finish.

A long descent follows to Cangas del Narcea, which lies at the foot of the final haul to Santuario del Acebo, the most demanding of the day’s quartet of climbs. The 7.9km ascent begins with a long stretch at 15% that could immediately whittle the red jersey group down to its bare bones. There is some respite to be had after 2km of climbing, but the road pitches up inexorably thereafter, with the gradient rarely dropping below double digits save for the briefest of descents with 3km to go. It may not be as steep as Los Machucos, but the average gradient of 9.7% tells its own tale. Expect gaps.

The second instalment in the doubleheader is only slightly shorter and hardly any less difficult. Indeed, stage 16 from Pravia to the Alto de la Cubitilla features over 4,000 metres of total climbing, which is 600 metres or so than the peloton faces on Sunday. After a long preamble on gently climbing roads, the first ascent rears into view in the shape of the category Puerto de San Lorenzo (10km at 12.5%), which is followed by a most familiar ascent from Vueltas past, the category 1 Alto de la Cobertoria (8.3km at 8.2%).

In recent years, the Cobertoria has perhaps been best known as the beckoning antechamber to the hell of the Angliru. It featured most notably in 1999, when its rain-soaked descent arguably made a greater impact on the complexion of the Vuelta than the Angliru itself. Fernando Escartin, now the Vuelta’s technical director, crashed out of the race on the descent, while race doctor Fernando Astorqui, who treated multiple fallers that afternoon, described the scene as being “like a war.”

Rather than take in the Angliru, the Vuelta on this occasion heads for a new climb that leads to the border between Asturias and Leon. The Alto de Cubilla has been given special category status, thanks in no small part to its seemingly interminable length. Officially, the climbs begins 17.8km from the finish, but in practice, the road ascends for the last 34km of stage 16. The Cubilla does not boast any especially vicious gradients – it reaches a maximum of 9% – but there is precious little respite, either, as the average of 6.2% attests.

Atop Los Machucos on Friday, the Movistar pair of Valverde and Quintana appeared resigned to Roglic’s supremacy even if neither man was willing to concede defeat. The final week of the Vuelta has, on occasion, been the site of dramatic reversals in fortune – Alberto Contador’s miracle at Fuente Dé is the most remarkable recent example – but the road to victory for anyone other than Roglic is complicated.

A week from Madrid, the gaps are daunting. Valverde lies in second at 2:25. The neophyte Pogacar, third at 3:01, carefully insists that he does not expect to challenge his fellow countryman for red. Lopez is 4th at 3:18, with Quintana further 15 seconds back in 5th.

The Frenchman has been behind the wheel for seven Grand Tour victories, and he believes both Roglic and Jumbo-Visma have drawn lessons from his third-place finish at the Giro d’Italia in May. The team’s strength in depth, for one thing, has allowed them to offset the loss of Steven Kruijswijk more ably than they did Laurens De Plus’ abandon in May.

“Here Roglic isn’t riding more conservatively but a bit more in a smart way. He knows it’s more of a marathon. He knew it before, but now he knows how to act,” Portal said. “They lost one strong rider but that’s not a big deal for them here.”

Roglic and Jumbo-Visma have defended the lead with apparent ease since he took hold of it in Pau last Tuesday, and his buffer is such that the men chasing him may eventually start to focus on racing one another for the podium places rather than risking all to disturbed the maillot rojo. The coming two days, then, will be of capital importance. The problem, of course, is that so far, Roglic hasn’t been unsettled by any of his closest challengers, regardless of terrain.

“Normally when you’re good, you don’t have much problem on any kind of climb,” Roglic said on Friday evening.

Don’t his rivals know it.