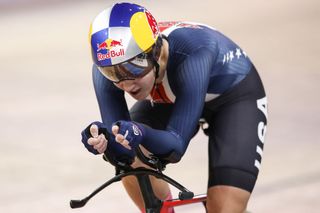 The USA’s Chloe Dygert on her way to the gold medal – and the rainbow jersey – in the women’s individual pursuit at the 2020 UCI Track World Championships in Berlin, Germany (Image credit: Getty Images Sport)

When the USA's Chloe Dygert won the gold medal in the individual pursuit at this past weekend's UCI Track World Championships in Berlin, Germany, she said she was slightly disappointed with her time. Her goal – 3:14 – would have eclipsed the frozen world record in the three-kilometre team pursuit, set in 2012, just before the women's team pursuit changed from a three-person, three-kilometre event to a four-person, four-kilometre event.

But Dygert's time of 3:16.937 wasn't too bad. In fact, it was a world record. Her performance encapsulated a trend across track pursuits: stunning times from both women's and men's individual and team pursuits.

As the last major international competition before the Tokyo Olympic Games, last week's UCI Track World Championships were the proving ground for national federations' A-squads. There, a new generation of superstars and hardworking federations shattered world records in both the individual and team pursuit. It was the latest step in a remarkable development in track cycling: the golden age of pursuiting.

Dygert may be the world's best time triallist. She's young, fast, and setting benchmarks that push her competitors to new heights. Only two years ago, Dygert met Dutch star Annemiek van Vleuten in the pursuit final at the Track World Championships – a preview, perhaps, of their meeting at the 2019 Road World Championships.

Dygert had qualified first with a new world record of 3:20.072, taking 2 seconds off of the previous world record of her mentor, Sarah Hammer. Remarkably, Dygert's new world record was set at sea level in Apeldoorn, in the Netherlands, as opposed to Hammer's, set at elevation in Aguascalientes, Mexico.

At those 2018 Track World Championships, Van Vleuten – an established time trial superstar – had qualified second, nine seconds slower than Dygert. In the gold medal final, Dygert overtook and eliminated Van Vleuten on her way to breaking her own world record with 3:20.06.

Injuries kept Dygert from racing much of 2018 and into 2019, but she came back to succeed Van Vleuten as the 2019 individual time trial world champion. At the 2020 Track World Championships this past weekend, she once again lowered her individual pursuit world record by a stunning three seconds in qualifying, to 3:17.283, before lowering it further in the gold-medal final.

Dygert's progress has been reflected more broadly by her competitors' field: at this year's World Championships, 15 riders rode under 3:30 in individual pursuit qualifiers, which was a far cry from 2018, when only Van Vleuten and Dygert did.

In the men's individual pursuit, Ashton Lambie – the outsider-athlete with a history of gravel racing before picking up track bikes – made headlines for taking three seconds off the world record at the 2018 Pan-American Championships, also at altitude in Aguascalientes. He tumbled a record that had stood since 2011, and which was only a fraction of a second faster from the previous record, set in 1996.

Lambie's world record apparently set the motivation of reigning pursuit world champion Filippo Ganna of Italy, who responded to Lambie by further lowering the record with rides of 4:04.252 and then 4:02.647 this past season. In a shot across Lambie's bow, each of Ganna's records were at sea-level velodromes.

Considering that it took over 20 years for the world record to drop four seconds from Chris Boardman's 1996 time to Ganna's records – cutting over five seconds off Lambie's initial records – is truly exceptional. And prior to last week's Track World Championships, Ganna had hinted that he might crack the four-minute mark. He fell short in the qualifying round, albeit with another new world record of 4:01.934.

Lambie rode 4:03.640 – a personal best, and fast enough to qualify for second. The two met in the gold-medal final, where Lambie put up a good fight, leading Ganna through the first two kilometres before succumbing to the Italian's superior speed.

As with the women's individual pursuit, the two men's performances have raised the bar for those around them. While Lambie and Ganna traded world records, six other riders – Corentin Ermanault, Jonathan Milan, Felix Gross, Stefan Bissegger, Claudio Imhof and Ivo Olivera – joined them in going under that previously daunting 4:11 barrier.

Will either of them crack the four-minute barrier? Lambie looks the best poised, with a return trip to Cochabamba planned. We can only hope that Ganna – and the rest of the men's pursuit field – responds in kind next season.

The team pursuit has traditionally been the realm of powerhouse nations with robust track programmes, such as Great Britain, Australia and New Zealand. It's a cornerstone of the endurance track events at the Olympics. Accordingly, major developments in the world record coincide with Olympic years.

But since the 2016 Games, the world record has continued to fall due to the efforts of Australia, who twice set new records and brought the record under 3:50 for the first time at the 2018 Commonwealth Games and bettered their own time at the 2019 World Championships.

At last week's Track World Championships, Denmark joined the fray. With a bronze at the 2016 Olympics and silver at the 2008 Games, you could make a case that they've been in it all along. But Denmark's new world records – 3:46.579 in qualifiers, 3:46.203 in the first round and 3:44.672 in the gold-medal final – represent a stunning new development, as they brought the world record to a point nearly 10 seconds faster than the record a decade prior.

Once again, they're not alone: these World Championships saw New Zealand, France, Australia and Italy all ride times that would have been world records a little over a year ago.

The women's team pursuit world record isn't as old as the others. In 2013, the women's team pursuit was changed from a three-person, three-kilometre event to a four-person, four-kilometre event. That year, records tumbled as teams began riding the event in competition. The record reached a short stasis with Great Britain's 2013 record of 4:16.552 until the USA and Great Britain teams traded world records at the 2016 Rio Olympics and, and Great Britain lowered the mark to 4:10.236 en route to the gold medal.

In a departure from the other events, however, the women's team pursuit world record held fast at last week's Track World Championships. On their way to a gold medal, the USA rode a national record of 4:11.229, just over a second slower than Team GB's 2016 world record. But, once again, this event saw a new cluster of exceptionally fast times, with Great Britain, Australia, Canada and host nation Germany all riding 4:13 or faster.

Team USA's victory in the team pursuit may not have included a world record, but it was a moving tribute to their teammate, three-time world champion and Olympic silver medallist Kelly Catlin, who died in 2019.

When Chris Boardman set the world record in the men's four-kilometre individual pursuit at the 1996 Track World Championships, he probably didn't know that it would stand for 15 years. Boardman's time of 4:11.114 was set in the stretched-out superman position – his arms fully extended horizontally over the front wheel. That position was pioneered by Graeme Obree, best known for his innovations in pursuit of the Hour Record.

After the UCI banned Obree's controversial egg position, he began riding time trials in the superman position. It was less controversial, but almost as fast, and other pursuit riders scrambled to adopt the position or get left behind.

Shortly after Boardman's record-setting pursuit, the UCI banned the superman position, and some thought that the record couldn't be touched with a conventional time-trial position. When 21-year-old Jack Bobridge set a new world record at the 2011 Australian National Championships, he shaved only half a second from Boardman's time.

Bobridge’s record stood for half as long as Boardman's – seven-and-a-half years – aided in part by the decision of the International Olympic Committee to remove the individual pursuit from the Olympic programme after the 2008 Games. The Olympic track programme was reconfigured to provide event parity between men and women; at the 2008 Games, the men had seven events, and the women three. Without an Olympic medal on the line, the individual pursuit subsequnetly lost some prestige.

But whatever prestige the pursuit lost then has now been restored: a new generation of pursuit superstars has emerged, and the team pursuit, in particular, has risen in status as the site of increasingly high-level competition between national federations.

World records are falling. We expect them to: sport is about pushing against boundaries of what's possible, and developments in scientific training and bike aerodynamics make regular improvements possible.

But the rate at which individual pursuit and team pursuit world records have fallen throughout this past Olympic cycle indicates that these events once again represent a prestigious proving ground for athletes and their national federations. A renewed focus on these events has paid off. Sea-level performances have demolished records that were set at altitude. A new crop of athletes is riding times previously considered unimaginable only a short while ago.

Together, such performances speak volumes: we are in a golden age of pursuiting. With the Tokyo 2020 Olympic Games on the horizon, we may see the team pursuit world records continue to fall, and for the trend to continue into the following Olympic cycle.