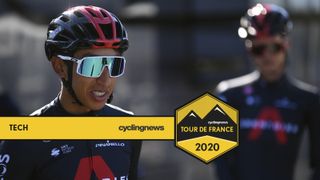 If you've been watching this year's Tour de France, you've probably spotted some new eyewear. The Tour de France is a hotbed of new tech, and even with its new position in the calendar, 2020 is no different. Whether it's yet another colourway for Peter Sagan, diamond-encrusted specs for Alexander Kristoff or the seemingly upside-down frames of Marc Hirschi's sunglasses, the race for the best cycling sunglasses is hotting up.

With the launch of new options from 100%, Koo, Scicon, and a host of new colourways from Oakley, we've decided to round up some of the biggest names from this year's race and overview their choice of eyewear. Then rather than just leave you salivating at spendy sunnies, we've even given you an idea on where to buy them, so that you too can look pro - even if like us, you go slow.

Of course, most professional cyclists have sponsorship responsibilities via their team. Ineos Grenadiers are sponsored by Oakley and Jumbo-Visma by Agu, for example, but within the constraints of the brand, riders will ultimately have a choice of model it's, for this reason, you'll often see Geraint Thomas (who's not at this race, of course) wearing the old-school style Oakley Racing Jackets next to Egan Bernal's ultra-modern-looking Oakley Sutro.

So without further ado, let's dive in to who's wearing what.

A sunglasses roundup wouldn't be complete without Peter Sagan's inclusion. Luckily though, we're not going to point you in the direction of his podium antics sporting skiing goggles – thank heavens that never caught on!

As we announced prior to the grand depart in Nice, Sagan's personal sponsor – and his Bora Hansgrohe team's sponsor – 100% released a brand new Sagan Collection of its eyewear range. The 2021 Sagan collection is one of many collections from 100% that have borne the Slovakian's name over the years, and this edition's design is predominantly white with hints of gold.

While the three-time world champion has a choice of the brand's S3, S2 and Speedcraft models, he's most often seen wearing the S3. Given they're a brand new collection, it's perhaps unsurprising that they're currently only available directly from 100%.

However, if white and gold isn't your style, there are plenty more colours to choose from.

On recent evidence, Egan Bernal is a rider who takes eyewear fashion seriously. His Ineos Grenadiers team is sponsored by Oakley, so he has the full range of Oakley Cycling Sunglasses at his disposal, and judging by the variety he's worn, his collection is probably only bested by Mark Cavendish.

The coolest pair he's been spotted in, in this writer's humble opinion, are the Concept Studio collection Sutro Origins. Sadly, Oakley has sold out, but you can find a pair on eBay.

Of course, you mightn't be too fussy on the colour choice, if that's you, there are plenty of retailers selling Oakley Sutro and Oakley Sutro Origin sunglasses.

The Frenchman might have fallen out GC contention, but he's not fallen out of the hearts and minds of cycling fans the world over. One of the coolest riders in the peloton, Pinot's Groupama-FDJ team are another sponsored by Oakley, and he tends to use the more traditional design of the Oakley Radar EV sunglasses. This year, he's been sporting Oakley's Kokoro collection, designed by Meguru Yamaguchi.

You can view the entire Kokoro Collection range here, but if you're not won over by the design, there are endless retailers selling the Oakley Radar EV.

As the reigning world champion, we couldn't leave Pedersen out of this list and by a fortunate coincidence, it just so happens that he's sporting some new sunglasses from his team's sponsor Koo. In the lead up to the race, Koo launched two new pairs, the Spectro and the Demos.

Pedersen's been seen sporting both pairs, but he's been wearing the Demos sunglasses for the most part, and they're available at All4Cycling and 700Cycles. Or, of course, at Koo's own website.

For a closer look at both pairs, they featured in our Musette Tour de France special.

Pogacar's UAE Team Emirates is sponsored by Scicon, but he's not sporting the €5,000 diamond-encrusted sunglasses that his teammate Kristoff wore on the podium after day one. Instead, he's been flitting between both of Scicon's new pairs of sunglasses. For the most part, he's been seen in the Aerowing, but for his win on Stage 9, he'd switched it out to the Aeroshade with a clear lens.

The Aeroshade are 'high in demand' according to Scicon, so you'll have to go onto a waiting list if you want them, or you can pick up the Aerowing today at £160.00.

The Jumbo-Visma team are sponsored by Dutch brand, Agu - the same company behind Fast Forward wheels. While Van Aert and Roglič have both been on the podium using the Agu Podium glasses, on the road, they've also both been spotted using a sunglasses that are yet to be released by Agu.

Van Aert, however, has also been using the Verve HDII, which are available at Agu.com, or Bike24.com.

Over the past few Tours de France, there has been an ongoing race to maximise the sunglasses to face ratio. This has been made even more apparent with the introduction of mandatory post-race face masks and now at the start- and finish-lines, riders' identities are almost unfathomable due to their hidden faces. Adam Yates is currently leading the big-glasses-small-face race, and he's doing it with a pair of Scott Shields.

There's nothing custom or special about the Briton's specs, so they should be available in abundance. Check them out and find your nearest dealer at Scott-Sports.

Saving the best for last, 22-year-old Marc Hirschi has won the hearts of fans all over the world with his 2nd place on stage 2, his daring breakaway on stage 9 before he was pipped to the line by Pogačar and Roglič, and third time lucky, a win on Stage 12.

His Sunweb team is sponsored by Roka and, from its range, Hirschi has been using the quirky-looking Matador sunglasses, which differ in that the arms are affixed to the lower portion of the lens, rather than the top.

They're relatively hard to come by and they're even out of stock at Roka, but they are occasionally available here at Amazon.