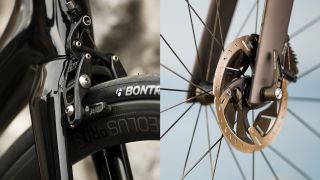 As the delayed racing season is now finally underway, one thing remains unchanged by the racing hiatus, the presence of the rim brakes vs disc brakes debate.

With Wout van Aert's explosive return to racing with wins at Strade Bianche, Milan-San Remo and stage 1 of the Critérium du Dauphiné, tech aficionados were quick to highlight the Belgian's choice - or at least his team's choice - of stopping power; rim brakes.

Next, with riders again pushing the limits of their bikes and components, a single accident has lit the proverbial touchpaper in the debate. Swiss pro, Simon Pellaud, crashed during a descent at the Giro dell'Emilia, with brake failure as the cause of his misfortune. The Swiss was riding a disc brake bike.

Expectedly, this has flared the issue of hydraulic disc braking safety compared to traditional cable-actuated rim brakes. Although Pellaud was descending in a group where not a single other rider suffered brake failure (nor did any of his teammates), the notion of complete brake malfunction remains a deeply relatable fear for any cyclist.

Despite most of the pro peloton now being disc brake enabled, and nearly all of the best road bikes also coming equipped with discs, the rim brakes vs disc brakes debate roars on.

Pellaud’s crash is upsetting, but aside from early protests against safety, it remains a rare - if isolated - incident in professional cycling's short history with disc brakes. Since Marcel Kittel gave disc brakes their first Tour de France win back in 2017, the safety record of hydraulic disc brakes in all competition has been exemplary.

Without clarification by Pellaud or his team describing exactly what caused the mechanical fault on that descent, appropriating Pellaud's misfortune into a campaign against the disc brake would seem awfully misplaced, considering the multitude of other pro riders who are using the technology without detriment.

In our prediction, no. But not because the technology isn't adequate.

As we lead into the start of La Grande Boucle, the three favourites to win the overall are Primož Roglič and Tom Dumoulin of Jumbo Visma, and Egan Bernal of Ineos Grenadiers. All of whom will be using the so-called-primitive rim brake stopping power.

While disc brakes can offer an advantage to braking power and modulation, most notably during wet weather, rim brake technology is still an incredibly capable form of stopping power, and the difference in benefit isn't vast enough to undo the capabilities of three of the best cyclists in today's pro peloton.

Contrarily, rim brakes offer a logistical trump card when the narrow passes and high mountains come calling. During times where the team car isn't immediately available, neutral service motorbikes are on hand to supply Mavic wheels in the event of a puncture. While the majority of teams are aboard disc brakes, Mavic's neutral service offering will remain a rim-only affair.

Secondly, with clearances measured in micrometres rather than millimetres, a disc brake wheel change is more likely to lead to brake rub. It's for this reason - and the small amount of time saved - that disc-brake riders have been opting for complete bike changes instead of wheel changes.

Looking further down the list of Tour de France contendors, it seems that if disc brakes are to win their first-ever Tour de France title, the responsibility rests upon the shoulders of the French. Thibaut Pinot (Groupama FDJ) sits as fourth favourite aboard his disc-brake-equipped Lapierre Xelius, and Julian Alaphilippe occupies the spot of seventh favourite aboard his Specialized Tarmac SL7.

Rim brake supporters will table the presence of their technology on some of cycling’s most advanced time trial and triathlon frames. It is indisputable that some esteemed frame brands continue to market specifically targeted bikes, with rim brakes. The Canyon Speedmax and Orbea’s Ordu are two examples.

The argument is that a transition to discs would increase aerodynamic drag, but those margins are so tiny, that context is required to clarify the value of some watt saving claims.

Time trial and triathlon riders are obsessive about every singular aspect of their riding and slavishly adhere to aero body position principles. For them, the fractional aero gain of a rim versus disc brake can be significant, as most of the available aero improvements have already been achieved, in respect of helmet aerodynamics and body position.

In the real world, aero bars and extreme postures are not even a consideration on a training ride for most cyclists. You are the largest influence on your riding aerodynamics, not the choice of brake attached to your frame or fork. Claiming rim brakes to be worth their presence due to marginal aerodynamic considerations, have little value to amateur road riders, who are mostly not riding in neatly tucked aero positions or leaning on aero bars.

Cervelo is one of the most celebrated aero brands in all of frame design and its current portfolio of time trial and triathlon bikes are disc-only, which is telling.

Most of us are not in the peloton

You might never be able to replicate the power of Sagan in a sprint, or have the climbing ability of Quintana, but the bikes and equipment they ride, are within in your realm of attainment.

Bike companies spend a great deal of money on research and development, which in all truth, deliver very modest gains for the money. Despite the industry’s commitment to creating new technologies, the bicycle remains a very mature instance of product design with only small gains to be made.

There has always broadly been an inarguable tension between the desire for innovation and traditionalism. Cycling is similarly bold but also conservative, hence the peculiar resistance to disruptive technologies by some groups within the sport.

Over time, new technologies reduce in price as scale is achieved. The point is that previous trends give us a robust indication that disc brake road bikes will reduce in price, over time. If cost escalation is the annoyance driving much of the rim-versus-disc discussion, it is misplaced. There are already value road bike offerings with disc brakes in the market.

Especially in the wet, but also in dry conditions, disc brakes can deliver a useful margin of safety for average riders. Most of the peloton are now using disc brakes to manage speed on descents, in extreme alpine terrain, for good reason.

Punctures can decide stages and the QR dropout does facilitate marginally swifter emergency wheel swaps from teammates, compared to a disc brake frame and fork, with its thru-axles.

Wout van Aert won the Strade Bianche, Milan-San Remo and first stage of Dauphine on a rim brake bike, but again, this is a strategic concern for pro riders and the relevant directeur sportif. It has very little applicability for amateur road riders.

Servicing can become more burdensome with a hydraulic disc system, but the reward in terms of safety is well worth it.