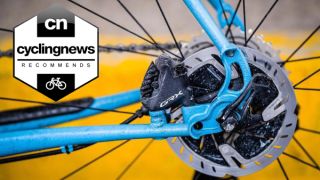 Disc brakes are synonymous with gravel bikes. Beyond the superior braking power offered by a disc rotor, they also don’t limit tyre clearance the way a traditional rim caliper does — yes we know cantilever brakes allow for fat tyres, but they also don’t work all that well.

Best gravel bike wheels: Our pick of the best gravel wheels for racing and adventure riding

Best gravel tyres: from dusty to dirty, here's our pick of the best tyres for your gravel bike

Whether they're mechanical or hydraulic, disc brakes offer consistent stopping power regardless of the weather. With traction on gravel roads and singletrack more variable than what you’d find on the tarmac, being able to precisely apply power right to the limit of the available traction can be the difference between making around a dusty hairpin or ending up in the scrub on the outside of the corner.

Read on for our pick of the best disc brakes for your new gravel bike.

Jump to: what you need to know about disc brakes

The disc brakes you can buy today

The most powerful brakes you can buy for drop bars

A common discussion among mountain bikers is two-pot or four-pot brakes? Four-pot brakes have four pistons in each caliper driving the pads and offer considerably more power, modulation and control than their two-piston counterparts. As such, you’ll usually find four-pot brakes on every category of mountain bike except for XC race bikes, simply because two pot brakes are lighter.

When it comes to disc brakes for road bikes, two-piston brakes dominate the market, however, British outfit Hope has turned the braking power up to 11 - well actually, four - with its RX4 caliper.

With double the pistons and an ultra-stiff caliper, the RX4 is ideal if you’re a big rider, or your gravel bike has a dropper post. CNC machined and anodised, the RX4 comes in versions designed to work with Mineral Oil and DOT fluid so that they will work with both SRAM and Shimano/Campy levers.

The benchmark for mechanical disc brakes

While hydraulic disc brakes are seen as the end all be all when it comes to stopping, cable-actuated discs are no slouch when it comes time to drop the anchors. The Spyre use an articulating arm which is pulled by the cable to drive the pads evenly from both sides to prevent disc warping or uneven pad wear.

Available in both post and flat mount-varieties, a barrel adjuster on the calliper makes for simple tool-free tuning and adjustment. Pair these with compressionless brake housing and you’ll have consistent, sponge free braking without ever having to deal with syringes or needing to learn what a brake hose olive is.

Anodised and easy to adjust

Manufactured in Paul Components Chico, California facility, the Klamper is a CNC-machined mechanical-disc brake caliper with plenty of power and adjustability on tap. The caliper itself is 6061 aluminium - Paul makes the pistons from 12L14 heat-treated steel which, in collaboration with oversized ball bearings, make for a smooth lever pull. The single-piston design also uses a needle bearing on the pad actuator to further reduce friction.

Single-piston brakes require the inboard pad to be positioned close to the disc to limit rotor flex, and the Klamper utilises an oversized notched dial for adjustment; meaning not only is it tool-free but it can be adjusted on the fly, even with gloves on. Paul makes the Klamper in both flat and post mount.

With its wireless drivetrains, SRAM introduced what it calls HydroHC. This borrows technology from the brand's mountain bike brakes, guided by the success and failures of the Guide and Level brakes.

This has been continued into the latest Force AXS components integrating reach adjust, and independent contact point adjustment into the levers. The HydroHC system also incorporates the Bleeding Edge for fast and faff free bleeds. What all of this translates too is easy single finger braking, with oodles of power on tap with little to no maintenance.

Shimano’s gravel-specific GRX groupset was launched last year with plenty of fanfare and since has impressed with its performance. As far as we can tell the GRX brake calipers are essentially the same as their Ultegra compatriots, the main difference in the system being at the levers.

First and foremost the lever blades have a rubberised texture, that’s immediately noticeable, especially in the wet and pivot point has been moved up, to allow for more leverage. Shimano has also applied the Servo-Wave technology seen in its MTB brakes, which speeds pad actuation until the contact point and then slows things down to provide more modulation. You can also add hydraulic inline brakes should you please, though they don’t offer a ton of power.

Hydraulic brakes have earned their spot at the top of disc brakes because of the power and modulation they offer at the lever, combined with minimal required maintenance. If you are looking to swap to hydraulic braking, short of replacing everything, there aren’t many good options to convert cables to brake fluid — most of them involve big ugly converter boxes and a rats nest of cables and hoses.

It’s because of this; we think the TRP HY-RD is the best option to upgrade short of purchasing new brake levers. The genius of this system is that all the hydraulics are located on the caliper itself, meaning it can be operated with the levers currently on your bike. With compressionless housing, the HY-RD offers fantastic power and control, almost but not quite what you would expect from the real thing.

If your budget doesn’t have room for an electronic group, SRAM’s Rival Hydraulic groupset offers fantastic stopping, at a fraction of the price. When discs first came to drop bars the brand stumbled, however, they went back to the drawing board, and subsequent versions have shown significant improvements in performance and reliability.

Even though Rival sits low in SRAM’s component hierarchy, it is a benefactor of trickle-down tech, swapping out exotic materials for cheaper alternatives. With a dual-piston design, the system is hydraulic and uses DOT fluid which needs to be handled with care and bled more often than mineral oil. Using the same skyscraper silhouette as the Rival 1 brake levers, the tall master cylinder prevents your hands from slipping over the hoods, and the brakes have as much power as their more expensive counterparts. Even with a proper bleed,  the lever feel doesn’t quite match the more expensive versions, but there is still no shortage of control.

What to know about disc brakes

Even with the most flash and expensive brakes, a worn-out or glazed set of brake pads can destroy braking performance, and make a big show about it too. The type of pads you're using can also have a significant effect on what happens when you grab a handful of brakes.

There are two main types of brake pads, organic/resin or metallic/sintered. Organic pads are made from a mixture of fibres which are held together with resin. These will give you more initial bite when you squeeze the brake, but they don’t manage heat as well, and can succumb to brake fade over the course of a long, steep, descent. Organic pads also do not perform as well in the wet, and wear may be accelerated in muddy conditions

Metallic or sintered pads are made of metallic particles which are heat moulded together. They offer consistent performance across all weather conditions, and will not fade over the course of a long descent. However sometimes, when wet/contaminated, they scream louder than a howler monkey, and they can be hard on rotors too.

With that said, we tend to prefer metallic pads in most situations.

When it comes to upgrading brakes, you may be limited by the rest of your drivetrain. If you have a hydraulic system, your options will be limited as far as slotting in different calipers because each uses a different hydraulic fluid, and your brakes and levers will only be designed for that type. Using mineral oil in a system designed for DOT fluid will void the warranty and likely cause damage to seals, or even a complete brake failure — more on this later.

With that said, there are a few systems like Hope’s RX4 which come in separate versions designed for mineral oil and DOT fluid.

Mechanical disc brakes allow for quite a bit more freedom with a caveat. SRAM and Shimano levers and Campy levers utilise a different cable pull ratio, so you’ll need to make sure your calipers play nice with your brake levers.

If you’re looking at hydraulic brakes, you must stick with the correct brake fluid, as they are not cross-compatible and can ruin your brakes and even lead to a brake failure.

Shimano and Campagnolo use Mineral oil in its brakes while SRAM opts for DOT fluid. In the context of disc brakes for bikes, the main difference is the way that they manage water, which will inevitably make its way into your brake lines, and plays a role in your brakes losing feel over time.

DOT fluid absorbs this water, while Mineral oil does not — because it’s oil. When DOT fluid takes on H2O over time, it lowers the overall boiling point, leading to a spongy feeling at the lever. Mineral oil does not mix with this water (because it's oil), it creates pockets in your brake lines and can change viscosity throughout the brake line. Mineral oil is also safe on your skin and environmentally friendly, while gloves should be worn when dealing with DOT fluid, and it will need to be disposed of according to your local guidelines.