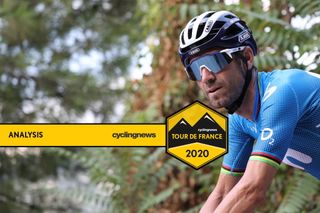 Things are hotting up at the Tour de France – quite literally, as it's 30°C most days, and it's meant to get warmer over the weekend and into the third week. That's not good news for anyone who is feeling tired, and there are many, given the manner in which this race is being ridden.

Nerves are getting frayed with the number of crashes and controversies, and incidents like the Peter Sagan shoulder charge are adding to the tension. Fittingly, just as the peloton entered the rugby-playing territory of central France, the seven-time points classification winner threw a spanner in his own works with a move that hints at the frustration of not taking a win rather than physical exhaustion.

The debate over whether it was a move that merited a sanction seems to be split 50/50. Some sprinters thought it was okay and others said it wasn't. Wout van Aert – who was the one on the receiving end – definitely thought it was the latter, and wouldn't be bullied by the Slovakian. You can understand why after the terrible Fabio Jakobsen crash at the Tour de Pologne.

The finish in Poitiers at the end of stage 11 was similar in that it was downhill into the final phase of the sprint, but then it became uphill and was also into a headwind. Not that it slowed anyone down very much, but the consequences of an incident amongst the fast men would have been immense. Hence the jury deciding enough was enough.

That Caleb Ewan won was no surprise, as it was super fast and he looks to be the most rapid of the lot, in contrast to the day before when it was Sam Bennett crossing the line first after a day of dodging traffic furniture on narrow roads, that suited everyone who had dreams of racing in Belgium.

Of course, the way stage 10 was ridden was different to how a one-day Flandrien race would have been, but it's interesting all the same to see who is paying proper attention and who is swinging on the back foot because they're not being strong enough or not having the support to keep them up front.

For Jumbo-Visma, it was butter on their parsnips, and to a lesser extent, the same applied to Egan Bernal at Ineos Grenadiers, as he had the help of Michal Kwiatkowski and Luke Rowe. It was more complicated for Tadej Pogacar when he punctured late on, as he has two fewer guys in his UAE Team Emirates squad. However, he was lucky it was on a headwind section and things were a bit calmer.

For the others being touted as contenders, stage 10 was rough, as the constant changes in direction and fighting for position would have hurt them more than any other day of this second week.

It's no surprise that the following day turned into an active rest day – as much a physical recovery as a mental one. The middle part of a Tour de France is when the fatigue begins to make its presence properly felt, and especially this year, as nobody has the depth of racing that they normally would. You can train all you like, but nothing replaces the efforts that day after day competition brings.

10 days into the Tour is when those who are going to fall apart will begin that descent into purgatory, and those who are used to becoming stronger will start to feel better. The latter group is small, but it's significant, as they'll be the ones winning stages and shaping the race.

For the falling-apart people and those who haven't bounced very well when they fell off, it looks like their fate has arrived earlier, no doubt due to the speed the stages are being raced. Chances are in the Tour that you will crash at least once, so although it seems more luck than planning, it's quite often the same guys who are the unfortunate ones and who then fall apart.

It was inevitable that when Bernard Hinault was asked his opinion on the race so far, and to speak of the misfortunes of Thibaut Pinot, he would take a fairly harsh stance.

The Breton was never known for his diplomacy, and nothing has changed. He's right that there won't be a French winner this year, and they won't be influential in any of the major decisions in the Alps, but there's a way of saying that so people don't take offence.

Not that Pinot would have been that bothered because he's more than likely planning his future without the stress of being the Tour's French hope anymore, and besides, his Groupama-FDJ team has manager Marc Madiot to defend its choices.

As Madiot said when questioned, 'The Badger' made his decisions when he raced without consulting anyone, and Groupama-FDJ they are doing the same. Basically, Madiot told the five-time Tour winner to do one – just as Van Aert had discussed that option with Sagan, although that was in more colourful terms. I might have done that a few times myself.

I'm not sure if many people have noticed, but over at Movistar, Alejandro Valverde seems to be up to his old tricks.

He's wearing the team's bib number ending in '1', so he already looks like he's the guy considered the most worthy of the support of the other riders in the team. But he's not meant to be the GC option. Somewhere in his mind, he must still be thinking he is, and somewhere in the Movistar camp they must be thinking he is, too, because Enric Mas isn't deemed good enough to be number 91.

No wonder Nairo Quintana left; the whole thing seems to hang on Valverde's feelings, and they're back leading the team classification. Plus ça change plus c'est pareil.

Elsewhere, there's a definite feel that 2020 is signifying a changing of the guard because so many young riders are coming through. We have riders like Marc Hirschi who aren't afraid to throw themselves at the horizon and see what happens.

Pogacar does the same, and he's looking likely to be good in the Alps, which I'll remind you is where Bernal took the race by the scruff of the neck last year. Bernal's intending to do the same again, and even though Ineos are not controlling the race, they are very attentive.

Race leader and big favourite, Primoz Roglic may be older than Bernal and Pogacar, even he doesn't have a long background of cycling, and so seems to be a fresh personality to discover. Good luck finding it, though, as he's as robotic in his riding as his interviews are woeful. Thankfully, we still have Julian Alaphilippe to provide some entertainment.

One last thing: remember Adam Yates saying he's not interested in a top finish in Paris? I'm not totally convinced of that. He's paying attention, lurking nicely, not taking too much wind or wasting energy. As Sean Kelly likes to say, he's playing a waiting game. One to watch.