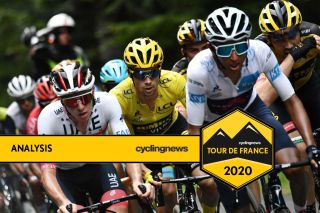 The song by Europe has to have been inspired by a bike race. I mean, the opening verse has all the elements that you encounter when you ride a stage race. You all set off in a group, saying goodbye to your friends, full of hope that might come true. Or the second part is referring to crashing – but even if it isn't, I hate that song. I've heard it so many times, for example whilst waiting to climb onto the start ramp of a time trial, that its association with pain has marked my psyche.

As the penultimate weekend of the Tour de France looms into view, the GC places are far from being decided, a refreshing departure from most of the recent Tours. The 2019 edition was exciting, but this year's race has taken that suspense and added some more intrigue to who might do what and when.

After the first trio of summit finishes at Orcières-Merlette, Mont Aigoual and the Puy Mary, it's apparent that the current race leader, Primož Roglič, is in top form, but compared to previous years, his is not a crushing presence on the race. Well, not yet anyway.

Jumbo-Visma may have the best team to control the peloton but they are using their resources wisely. Compare that to Ineos Grenadiers, who seem to be sticking to the same plan that the British-based team have used to win all their Tours, namely setting a high tempo and hurting everyone.

The only problem is they seem to be missing the firepower that we've come to expect, and adding to that is that when they do try, they seem to be hurting themselves and Bernal more than the guys they are trying to eliminate.

It's quite telling that Ineos often place a rider in the early attacks, which is kind of like saying: "We don't quite believe we can do what we are used to doing – dominating." It's what they fall back on when things aren't entirely rosy. And they aren't for last year's winner Egan Bernal, who just isn't able to follow the best when it gets really grippy. On the long Alpine climbs to come, he ought to do better, and in the last week of his previous two Tours, he has got stronger.

It's not over for Bernal, but he can't afford to lose any more time to his rivals. If we take the finish at the Pas de Peyrol on the Puy Mary, for example, he was at his limit before UAE Team Emirates phenom Tadej Pogačar attacked with 2.5 km to go, so not good at all – not when it was being set up for him by his team leading into the steepest sections. There might have to be a rethink of how Dave Brailsford uses his riders in what will be a very difficult last week.

In complete contrast to that, Pogačar looks to be the biggest threat to Roglič's lead. The young Slovenian has an acceleration that only his compatriot can follow, and he settles into a high enough tempo that means the others may be just as strong while lacking the instant speed injection they'd need in order to claw their way back.

The problem he has is that UAE Team Emirates don't have a team to back him up, while the time lost in the echelons of stage 7 aren't going to be taken back easily, despite his gains the following day in the Pyrenees.

It's certainly possible – and I don't discount an Alpine revival for Bernal – but it's looking more likely it'll be Roglič and Pogačar fighting over the victory at this stage of the race.

The best of the rest

Behind them, everything is still to play for from third to 10th. The riders battling over those positions look to be on the same level, more or less. Some days, one of them manages to stick with the top two, whereas on others, they fall back into the chasers.

The biggest surprise has to be Richie Porte, in his last Tour de France as a leader, and his last for Trek-Segafredo. The Australian is enjoying a return to the GC fight, and he's looking reliable for a good third week.

The loss of Bauke Mollema to a crash and broken wrist won't help the team keep him there, but at least now they know who to fully support. In any case, positioning and paying attention to what's happening is a lot easier in the mountains, so there are fewer potential chances of being caught in the wrong place at the wrong time, as Porte was on stage 7.

Someone else who falls asleep all too regularly is Bahrain McLaren leader Mikel Landa, but so far he's done much, much better than in previous Tours. A bit like Porte, the Spaniard hasn't got the acceleration to jump on the attacks from Pogačar, but he's been strong enough to keep the best guys in view when it's uphill.

Maybe this will be the year he progresses from his previous best of fourth in 2017. He can just about count on Pello Bilbao to still be in the group when it's been whittled down to 30 odd riders, but not having Wout Poels with him is a blow.

The rest of the top 10 as of stage 13 has a distinct Spanish-speaking feel to it, with Rigoberto Urán (EF Pro Cycling), Nairo Quintana (Arkéa-Samsic), Miguel Ángel López (Astana) and Enric Mas (Movistar) all sitting within three minutes of the lead.

The latter is probably the least likely to improve any more, though. He hasn't shown anything like the strength or form of those above him on GC at the moment, and I can't see that changing. Movistar seem to be stuck in a phase of deciding if they are riding for the team prize, stage wins or GC.

Quintana ought to like the long Alpine climbs more than the shorter efforts we've seen so far, and he was with the best on the Peyresourde, so the odds on him having some influence are pretty good, and his team are all in for that to happen.

It's altogether more complicated to tell what will happen with López. He has the jump and the character to attack uphill – it's just that what follows that can quite often be unpredictable. Either he continues at full speed, or the lights go out and he falls back. Getting through the last week could be tricky for him, and, like Landa, his time trialling has been pretty weak. It's more likely a López attack will be used by someone else as a springboard to distance everyone, including López.

Which brings me to Urán – the ultimate 'always there or thereabouts' rider. EF have a good number of choices for the mountains, so I'd expect to see Urán with the best support in any front group outside of Jumbo-Visma and Ineos Grenadiers, at least until the proper sort-out happens and the respective leaders are all fighting each other directly.

I can see Urán and Bernal – who finished alongside one another on the Puy Mary – spending a lot of time together in the final week. How they sort out who finishes best Colombian will be interesting.

Finally, there's Mitchelton-Scott's Adam Yates, who I seem to spend a lot of time talking about. He's there in the background, quietly watching, fighting his way back, not really involved in the GC battle, but still safely in the top 10, despite protestations that his goals lie elsewhere.

He's riding well for someone who says that, and by staying out of the big attacks and riding his own pace, he's definitely a factor to be considered. Mitchelton-Scott don't have the firepower to bail him out if he has a bad moment, though.

In recent years, we've gotten used to seeing a three-minute gap between first and second on GC heading into the penultimate weekend, but at the moment that's the gap between the leader Primož Roglič and Enric Mas in 10th place, which makes for an interesting race for the really big mountains to come.

Sadly for French hopes, AG2R La Mondiale leader Romain Bardet crashed and has now left the race, while Cofidis' Guillaume Martin, who had been in third overall, has fallen back already and isn't looking too spritely for what's in store. But then we're all getting used to the international character of professional racing these days. We just need a new song to celebrate.