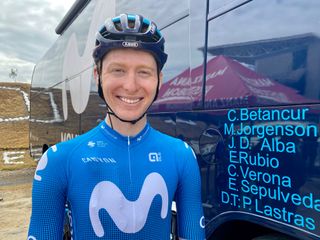 Twenty-year-old Matteo Jorgenson is a unique presence on Movistar. The tall, ginger-haired rider is the only American on the Spanish WorldTour team, and his path there also strayed from the normal route most Americans take to the sport's highest level.

Jorgenson, who hails from Boise, Idaho, spent his early years riding with US national teams at both the junior and under-23 levels, but when opportunities in the US started to dry up and he didn't get selected for Axel Merckx's Hagens Berman Axeon U23 development team, the ambitious young rider set out to blaze his own trail through Europe and catch the eye of the European teams.

After a year on Continental team Jelly Belly-Maxxis that saw him race mostly with the US national team, he landed a spot on the Chambéry CF development squad, a feeder team for AG2R La Mondiale. He learned French to fit in with his teammates and started to pile up the results that would propel him toward his ultimate goal.

Jorgenson is in his first race this week with Movistar at Tour Colombia 2.1, where Cyclingnews caught up with him to ask about his trailblazing path and how he's getting on in the team.

Cyclingnews: I looked at the USA Cycling results, and your first result is in 2008 in the 12-and-under category, and then there's not another result until 2016. What was going on during that time?

Matteo Jorgenson: I was definitely racing in the US all those years, but yeah, I started early for sure.

CN: And then you got onto Hot Tubes, one of the premiere junior teams.

Jorgenson: That was great. I was supported by some really amazing people in cycling in the US, like Barney King and Toby [Stanton] of Hot Tubes and then the national team. It was great.

CN: And then you were on Jelly Belly for a year. How did that come about? Did you contact Danny [Van Haute], or did he contact you?

Jorgenson: I was trying to find a team in Europe, to be honest. I was trying really hard around Worlds time and I couldn't. Danny had a ride left and he gave me an opportunity when he didn't really know me and I was super young.

He knew that I was trying to race with the national team most of the year, so it was kind of like he was just giving me a bike and I was going to come to camp. It was super generous of him. I'm super thankful to him, and it gave me a great opportunity to race in Europe, which allowed me to eventually come to Europe.

CN: You got some good results in Tour de l'Avenir and the Rhône-Alpes Isère Tour, and then you emailed Chambéry. That worked out well. They must have been impressed with your results.

Jorgenson: They're always looking to take on a few international guys to kind of help the French guys learn a bit of English maybe and just generally expand the horizons of the team. They respect that race a lot, Rhône-Alpes, and so they gave me a chance, which was super nice. It was an amazing year.

CN: It was impressive that you learned French when you went over so you could avoid being outside the loop with your team and teammates.

Jorgenson: That year I kind of made a formula on how to learn a language for myself. It's really helped me this year. I kind of know what I need to do like at meals. I just need to sit around guys speaking the language quickly and just kind of soak it in for awhile at first.

I use podcasts and listening and Duolingo to fill in the rest and learn how to conjugate verbs and learn the structure of the language. That year learning French has probably made it 30 times easier to learn Spanish this year. It's coming super quickly already.

CN: How many languages do you speak?

CN: Is the Spanish coming along well? You're definitely getting immersed in it.

CN: How have you been fitting in with the team?

Jorgenson: Great. It's been good. It's going really well. This is my first race. We had a short training camp in December, but other than that this is kind of my first foray with the team.

I was in Medellín a few weeks before this with Carlos Verona, and it's been really good. I've been enjoying it a lot, and for this race you kind of have to do something beforehand.

CN: How did your contract with Movistar come about?

Jorgenson: After l'Avenir I got their attention just by consistency, and also they had been kind of watching throughout the year, they said. They have a big push to internationalise the team, so that's kind of how it came about.

They contacted me, and AG2R wasn't ready then to give me a hard offer, so I said, 'You know what, I'm ready,' and I just went for it.

CN: Did the training period with AG2R really help?

Jorgenson: Look, I signed the stagiaire contract and they were kind of expecting me to come to the team. We had a calendar set out to do some races, and when they weren't able to offer me anything and I signed with Movistar, they kind of canceled the stagiaire, so I didn't do anything with them.

CN: Did you at least get a team kit?

Jorgenson: Chambéry is in the same kit. So I already had all that.

CN: What are your goals for your first year in the WorldTour? What are you looking to achieve?

Jorgenson: To be honest, I'm super young. Yeah, we're seeing guys like Remco [Evenepoel] and [Tadej] Pogačar who are ripping it, but I think these two guys are kind of once in a generation, or once in even a few generations even. So I don't think we can hold all young guys to that standard.

So I'm just looking to adapt and try to just bring myself to a level where next year I'm getting some results. This year I'm just trying to learn, integrate with the team and structure my lifestyle around a professional cyclist's lifestyle – just get everything a bit more optimised like my diet and my living situation and everything, so that in the future I can just focus 100 per cent on training at my peak. That's what I'm looking to do.

CN: There's been a lot of talk about you kind of taking an atypical path to the WorldTour. Do you feel like you're a trailblazer?

Jorgenson: A bit. Well, I don't feel like I'm a trailblazer. There have been plenty of Americans who have tried to do the same thing. I just think that a lot of guys focus on the wrong things when they go to Europe. They try to focus all on performance.

It's like, 'OK, now I'm in Europe I need to win some races to go pro,' and they neglect the parts that are the most important, like actually being comfortable in Europe and learning the language and all that. I think that stuff's more important as U23 when you're trying to break into Europe than actual performance, just because if you're not happy, you're not going to be doing well no matter how fit you are. So that's what I focus on.

CN: Any plans for a trip back to Boise and the States soon?

Jorgenson: Not soon. Maybe in the summer. Hopefully for nationals or something.

CN: It would be cool to see the Movistar kit at US Nationals.

Jorgenson: I'd love to. We'll see what happens, but I really want to. I haven't been to nationals for a few years.