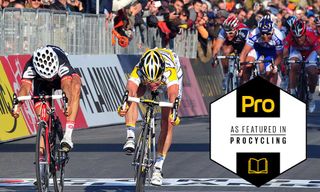 In December 2018 Mark Cavendish guest-edited an issue of Procycling. Among the subject matters he wanted the magazine to cover was Milan-San Remo, a race he won in 2009 and that he feels truly encapsulates what pro road racing is all about. This article was taken from Procycling magazine, issue 251.

That Mark Cavendish is still more focused on creating new material than compiling and admiring his Greatest Hits can be inferred from his suggestion that his guest-edited issue of Procycling should feature a homage to Milan-San Remo. Or rather, it can be discerned from the proviso that Cavendish immediately lays down: "I just don't really want it to be about my San Remo. I don't want everything to be about me…"

To some readers, such self-effacement might come as a shock. This, after all, is a rider who early in his career often faced accusations of arrogance, of bringing an element of boxing-ring bravado to a sport whose protagonists had traditionally been lauded for their humility. "I'm just giving you the facts: I am the best sprinter in the world," Cavendish typically argued, unwilling to indulge the sport's prudish traditions. He would then delight in silencing his critics before the next big statement of intent, the next round of tongue-clicking disapproval, and the cycle repeating itself.

The issue with glossing over his 2009 debut win in La Classicissima, as we'll explain to him, is not that it illustrated this facet of his early career. Indeed, the 2009 San Remo was unusual in that Cavendish had actively discouraged pundits and rivals from considering him a potential winner, and was delighted when they mostly heeded his advice. "That helped me massively," he concedes now. "No one had or rode to a plan to get rid of me. I'd said in the build-up that I couldn't win and everyone fell for it…"

Uncharacteristic it may have been, but Cavendish's San Remo is impossible to ignore because it belongs on the cover or centrefold not only of his personal canon but also in the race's - a volume that stretches 111 years. Far from being "just another bunch sprint", the heart-stopping moments when he gave chase behind, finally caught, then edged in front of Heinrich Haussler encapsulated what is now his central thesis on the first monument of the year: "It's a race where every single thing you do from the second you leave Milan matters. Going over a drain cover on the left of the road versus the smooth tarmac in the middle can be the difference between you winning and losing," Cavendish says.

Nowadays decried by the heretics as the 'most boring classic', San Remo once united all commentators at least in their appreciation of the event's brutality. The fourth edition, in 1910, took 12 hours for the winner, Eugène Christophe, to complete - and only five others among the 63 starters even saw the finish line. Celebrated as the first Italian champion 12 months earlier - and also as the first winner of the Giro d'Italia in 1909 - Luigi Ganna came in second behind Christophe and promptly told reporters that, having battled through blizzards on the Turchino and a downpour on the Riviera del Ponente, he would never compete in a bike race again. But an hour later he had been erased from the final results. The reason: Ganna's own team had reported him for covering a large chunk of the course in their car.

In those early years and indeed the first decades of the race's existence, several themes delineated themselves. Some remain central to the San Remo narrative today, like the Italians' obsession with 'home' winners, as evidenced by Vittorio Varale, the first great Italian cycling journalist, admitting his "sad premonition" that "one of them", meaning a Frenchman, would win yet again in 1910. These days a certain chauvinism remains but – fortunately – is worn a little more lightly. The telegrams from those pre-First World War Classicissima, delivered by correspondents stationed at different points on the route and distributed to crowds of up to 3,000 gathered outside La Gazzetta dello Sport's editorial offices in Milan, reveal another pattern that would endure: an oddly self-conscious fixation with the race's inherent value as a spectacle. The analysis of other great races typically involves a discussion of tactics and protagonists.

At San Remo, for who knows what reason, a neurotic compulsion exists that continually throws up questions about the event's very essence, its basic right to exist. This when, of all the monuments, it is perhaps the one whose soul has remained the purest, the one which has most stoically resisted root-and-branch change. None of which is to say that San Remo is unanimously loved in the 21st century, as we have established. In the age of fully televised 100km Tour de France stages and climbs like fireman's poles, a seven-hour, big-ring procession sounds like an unsanctionable anachronism. As our guest editor reminds us though, in San Remo's inevitability resides its wicked lie, its essential paradox: the most predictable thing about La Classicissima is that its destiny, its verdict and its winner, remain uncertain until its last seconds, his last breaths, our last gasp.

"It's the only race that's always decided by fractions of a second – not because that's the winning margin, although that's often the case, but just because every fragment of time, every tiny movement, has an impact," Cavendish says. "There's no time to correct mistakes. Maybe it's an illusion, but it doesn't feel like that's how it works in other races. It's like the picture of every other race has 100 pixels and San Remo's has 10 million.

"It's so Italian too," Cavendish continues. "I mean, there's no good reason to do that distance, except that if you didn't it wouldn't be San Remo. It winds up like an opera, which suggests there's a logic to it, but there are also things about it which follow no rationale except tradition: like, why do we race so hard up and down the Turchino every year? It's also a race that you can lose in the first one hundred kilometres. It seems so easy early on that you forget you need to save energy; a lot of guys are in the wind thinking it won't matter because the race seems so straightforward at that point. They forget that every single watt ends up being important in the finale."

It is also because of the concentrated nature of the drama, the decisions, the race-winning efforts – that, as Cavendish has often said, Milan-San Remo is the easiest of the classics to finish and the hardest to win. When he prevailed at the first attempt back in 2009 and La Gazzetta dello Sport hailed it as "a victory that would mark an era", it seemed practically inconceivable or at the very least unlikely that a decade would slide by without Cavendish leaving a second claw mark. He says now he can't quite put his finger on why there's been no repeat, or why indeed there was no dynasty like the one Erik Zabel, who guided him from the Highroad team car in 2009, was able build in the late 1990s. "I definitely thought I'd win it again after 2009. I've come close a few times but for various reasons it just hasn't happened…"

Herein we see another contradiction of La Classicissima – that for every Merckx or Zabel or Freire who developed a functioning formula, there have been era-defining riders who could never crack the code. Michele Bartoli tried some years on the Poggio, some years on the Cipressa. He finished in the top five in bunch sprints yet ended his career with a San Remo-shaped hole on an otherwise impeccable Classic-hunter's palmarès. Tom Boonen did likewise. In the current generation, Peter Sagan is the best example of an athlete with all of the requisite qualities but so far no bouquets – perhaps because the Slovakian hasn't yet fully grasped that, in this race, as Cavendish has told us and Freire and Zabel exemplified, economy is as valuable a commodity as talent.

While for a rider it can define a career, the normal folk of San Remo cherish their race as one of life's invariables and the second most important happening of every year, after February's music festival – in reality just a chintzy song contest. The latter is also the only thing about San Remo that most bike-riders, except maybe the Italians, could name. Cavendish is no different. "They have that music festival, don't they? After the race we just pack up and go. I had dinner there after the race once, and it wasn't very good. That was literally the only time I've spent even a few hours there."

Like many of the ports between the French border and Genoa, the town itself is often characterised as "faded" - though most first-time visitors would still recognise the "well-to-do colony of nouvelle richesse" depicted in Guido Piovene's famous travelogue, Viaggio in Italia, half a century ago. Competition from the Netherlands in particular may have encroached on the floriculture that gives San Remo a proud nickname, 'The City of Flowers', but vast greenhouses that sit like giant piano keys on the terraced hillside of the Poggio still provide an unmistakable backdrop. The seafront, meanwhile, has been reinvigorated by the construction of a cycle path which in 2011 was voted the most beautiful in Europe – and which four years later hosted the first stage of the Giro, a team time trial. As it enters the harbour of San Remo from the east, the path sweeps past the villa to which Alfred Nobel fled from Paris in the late 19th century, having been accused of committing the "high treason" of selling the explosive Ballistite, also his invention, to Italy. After his death in San Remo in 1896, Nobel's estate funded the creation of awards in Chemistry, Literature, Peace, Physics and Medicine, as per the request in his will.

A prize for outstanding achievement in cycling wouldn't come to San Remo until 1907. One hundred and nine times in the years since then the same, inexorable wave has swelled over the Turchino then crashed down the coast towards France, its tides violent and unreadable, its suspense palpitating and irresistible.

Mark Cavendish may disagree, but to me his win is and always has been the race of his career, the ride of his lifetime. On the day itself he was glad that until about half-five in the afternoon no one mentioned his name. Whether he likes it or not, now he'll just have to accept that we'll be talking about Mark Cavendish and that race for as long as the sublime, archaic aberration we know as Milan-San Remo is allowed to exist.