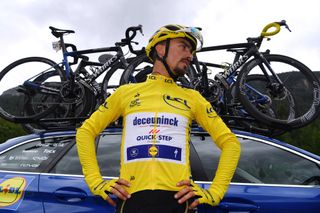 The following feature appeared in the latest issue of Procycling. You can subscribe here.

Julian Alaphilippe had the home fans in France believing that he could win the Tour’s yellow jersey this year. Procycling looks back at why 2019 was the Frenchman’s best season yet.

Julian Alaphilippe’s fizzing, exhilarating stage win in Épernay on stage 3 of the Tour de France was supposed to be about as good as it got for the Frenchman at this year’s race. A visit to the podium, a bonus couple of days in the yellow jersey, then he could concentrate on what he does best: televisual long-range attacks in the mountains to pick up mountains points and the polka-dot jersey, gif-able moments on the descents and perhaps a few on-bike stretches, too.

The situation as we looked at it that evening was this: the next day was flat, so the jersey was Alaphilippe’s for another day. Stage 5 to Colmar had a few middle mountains, nothing huge, but was more of a Peter Sagan day, rather than a Dylan Groenewegen or an Egan Bernal day. That made two days in yellow. And then, the Tour agreed, the key question for the very hard La Planche des Belles Filles stage on the sixth day was whether Alaphilippe could defend the 40 seconds that separated him from Bernal, or the 45 to Geraint Thomas. Some thought yes, some thought no. If yes, he’d probably keep the jersey through to the Pyrenees in week two; if no, it would be back to Plan A.

In the end, Alaphilippe lost the jersey on La Planche. However, it wasn’t because the GC riders had dropped him. Trek-Segafredo’s Giulio Ciccone, second on the stage, had picked up enough bonus seconds from the day’s breakaway - 14 - to put him six in front of the Frenchman. Alaphilippe had not only defended his lead on the GC riders, he’d increased it over everyone except Thomas, who finished two seconds in front of him. The Frenchman won the jersey back two days later with another attack, this time in tandem with Thibaut Pinot into Saint-Étienne, gaining 20 seconds in time and another nine in bonuses.

Then came the next questions: could he defend his jersey through the first Pyrenean stage to Bagnères-de-Bigorre (probably), the Pau time trial (possible but doubtful) or the massive Pyrenean stages to Tourmalet (surely not) and Prat d’Albis (definitely no)?

He was right in the middle of it when Deceuninck-Quick Step forced the race into echelons on the innocuous-looking stage to Albi, which put his closest rival Pinot temporarily out of contention, then the GC riders had a day off into Bagnères-de-Bigorre.

And then came the Pau time trial.

The mechanics would have winced at the damage to the tyres, but the exuberant skid with which Alaphilippe slowed to a halt after winning – winning – the Pau time trial, drew a thin line of rubber on the road, a physical manifestation of the line which now separated Julian Alaphilippe, baroudeur, from Julian Alaphilippe, Tour de France contender. At some indefinable point between Brussels and Pau, the stage hunter and attacker became a possible winner of the yellow jersey.

Sober, sensible voices still maintained that Alaphilippe’s doom was inevitable, but by now, his lead was actually starting to look solid. A minute and a half to Thomas; nobody else within two minutes; only three more riders within three; a further five within four. There were still the two biggest mountain ranges to come, but it was also true that out of 21 stages, there were just five significant GC days left.

It was on stage 14 that all bets were off. Pinot’s victory on the Tourmalet restored the sheen that had been rubbed off his GC challenge by the Albi stage, but the next rider over the line was Alaphilippe. He’d held on to the very best climbers of the Tour on one of the race’s hardest climbs, then outsprinted the few that were left to the line. The situation: Alaphilippe in yellow, Thomas second at 2:02, and the number of riders within five minutes had dropped to seven.

But just when it looked like he really could win the 2019 Tour, Alaphilippe started to bleed time. He shipped a minute to Bernal on Prat d’Albis, and even a dazzling, swooping descent on the Col du Galibier, up to, then through and past the GC group, couldn’t blind the believers into thinking that he could survive the last two Alpine days. He was looking obviously exposed on the long climbs and by the top of the Col d’Iseran, the dream was over. The Tour still had mercy on its favourite son – freak weather conditions meant that the climbs to Tignes and the Cormet de Roselend the next day were pulled from the route. If they’d been left in, the most likely outcome would have been more minutes lost.

Could Julian Alaphilippe win the Tour? Of course. But never on the 2019 route. He could win on a Tour with friendly route design, featuring fewer high altitude climbs, fewer long climbs and more in the way of the middle mountain territory and punchy finishes in which Alaphilippe thrives. The Giro d’Italia organisers of the late 1970s and 1980s used to do exactly this – when punchy sprinter Giuseppe Saronni was the big home favourite, a flattish Giro route with lots of time bonuses gave him two pink jerseys; time triallist Francesco Moser was given a similarly flattish Giro, complete with long time trials (and the controversial pulling of the Passo dello Stelvio owing to reported landslides).

The Tour organisers of the 21st century possibly have less leeway than the Giro organisers of the 1980s in favouring home contenders, but you could argue that the recent reduction in time trialling in the Tour has favoured Pinot and Romain Bardet. It will be interesting to see if ASO have the inclination to design a puncheur’s Tour in the future.

However, you could also argue convincingly that there’s a paradox at the heart of any Alaphilippe challenge at the Tour. It goes like this: Alaphilippe can only gain time by spending energy; winning the Tour is all about saving energy.

His attack on stage 3, in the vineyards of Épernay, was what turbo-charged his Tour, sparking the momentum that carried him all the way to that point halfway up the Col d’Iseran where he ran out of steam. But that attack also sowed the seeds of his destruction.

The Épernay finish consisted of a series of third category climbs, then an unclassified but very steep ramp up to the finish line. The final cat-3, the Côte de Mutigny, was 16km before the finish. Alaphilippe’s form was absolutely sparkling, clearly, and he would probably have won if the peloton had come into Épernay together.

However, he couldn’t help using the Côte de Mutigny as his launchpad. He’d recced the route, so the attack was planned, but while the result would have likely been the same whether he attacked there or up the final climb, the longer attack was more attention-grabbing. Plus, time bonuses alone wouldn’t have put him into the yellow jersey – he needed the extra time from the long-range effort to take the race lead.

We were so dazzled by Alaphilippe’s incredible attack and then the 20 or so minutes of flamboyant panache to Épernay, that we didn’t see the effort involved. He was going so fast over the Côte de Mutigny that Bernal, in his wheel, had to relent. There is a physical cost to exploits like these. Fans absolutely love these kinds of attacks, and rightly so. Tour-winning coaches probably have a more ambivalent attitude to them.

Onwards Alaphilippe went. He was in team-mate Elia Viviani’s lead-out train. He attacked the GC riders up La Planche des Belles Filles. He attacked into Saint-Étienne. He elbowed his way around the front group into Albi. He smashed his way through the Pau TT. He sprinted atop the Tourmalet.

You can’t ride like that at the Tour. Or, maybe you can, but you can’t expect to then survive three long days in the Alps.

Alaphilippe had bigger results in 2019. He won Milan-San Remo, his first monument. He wasn’t the favourite, nor the best sprinter on paper of the 12-rider group who came on to the finishing straight together. Peter Sagan, Matteo Trentin and Michael Matthews might normally all be confident of beating Alaphilippe in a flat sprint. However, his form and confidence papered over any deficiencies in terms of pure strength.

Alaphilippe also won Strade Bianche and Flèche Wallonne. Here he was on more familiar territory – he’s undoubtedly the best uphill sprinter in the world, and the steep climbs and finishes of these races gave his wins a sense of inevitability. At Flèche, his results read 2-2-1-1, and if he wants to, he’ll probably win enough to overtake Alejandro Valverde’s record five wins.

He should have won Amstel Gold. He’ll forever kick himself getting pulled into playing games with Jakob Fuglsang when they’d built more than enough lead for themselves to contest the finish. Alaphilippe should normally beat Fuglsang in a sprint from the front or behind – there was no need to try to manoeuvre the Dane to the front when Mathieu van der Poel et al were closing. After the Tour, he never rediscovered the form of spring, and though he was thought of as a favourite for the Worlds, both that average form and the weather played against him.

Alaphilippe has resisted the pressure of his home fans and media to embrace his position as a Tour contender. Though the 2020 route looks to have plenty for him to work with, he insists that he won’t temper his attacking instincts to make a more organised challenge for yellow, and he identifies as a one-day racer.

But it’s typical of cycling that Alaphilippe’s defining ride of 2019 was at the Tour. What did he actually do? He won two stages, wore the yellow jersey and came fifth. You could argue that 2019 was no more successful than 2018 in terms of results, when he won two stages and the polka-dot jersey. In order to get him on the Tour’s Paris podium this year, the organisers had to give him the super combativity prize.

But the difference was not in the stats, the data or the results. The difference was how Alaphilippe made us feel. In cycling, we know that there is a winner and there are losers, and Alaphilippe was a loser at the Tour. But cycling is nothing if it is not emotional, and 15 years down the line, when we’ve forgotten if Bernal won his first Tour in 2018, 2019 or 2020, we’ll remember that the summer of 2019 belonged to Julian Alaphilippe.

For 20 years we have brought the colour, excitement, grit, speed and glory of professional road cycling to our readers. A subscription to the magazine means insightful and authoritative writing from the most respected journalists in cycling, combined with breathtaking photography which showcases why cycling is more than just a sport for many, but part of our sporting culture. As well as conducting interviews with the top riders and figureheads in the sport, Procycling’s reporters are on the ground throughout the racing season, to bring a unique perspective on what makes cycling unlike any other sport.

From the Tour de France to the classics, Giro d'Italia and world championships, we cover all the races from the start of the year to the end. Subscribe to Procycling and make sure you never miss an issue, by getting the magazine directly delivered to your door each month. You’ll also enjoy savings on the cover price of the magazine in the shops. A year’s subscription will get you 13 issues over 12 months.