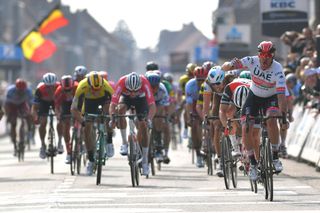 Gent-Wevelgem is like the middle child of the Spring Classics: often underrated, a little overlooked, and still seeking its own identity. It's not the sprinter's Classic that Milan-San Remo can be, it's not quite the hard-man's race that Tour of Flanders is and it's been many things over the years.

Gent-Wevelgem started out in 1934 as an autumn race, but first ran in the spring in 1947, and at one point paired up with the Omloop Het Volk (now the Omloop Het Nieuwsblad) to make up the two-day Trophy of Flanders.

The organisers have tinkered with the race's length, and the number of short, steep, cobbled climbs on the course, but ultimately settled on the Kemmelberg as the signature race-making ascent.

Six of the best: Through the years at Gent-Wevelgem

No longer starting in Gent, the race moved to suburban Deinze and was due to be relocated to the even more distant Ypres this year. Since 2017, the race has included several 'plugstreets' – dirt roads – in the final 60km, in addition to the cobbled Kemmelberg, to up the drama.

Of the past 30 years, Sagan has the most podium finishes, adding one second place and two thirds to stand on the podium six times.

George Hincapie holds the honour of most frequent finisher. The American raced Gent-Wevelgem 15 times – one more than Johan Museeuw and Mat Hayman over the past 30 years. Hincapie famously won the race in 2001, out-sprinting Leon van Bon and Steffen Wesemann.

Johan Museeuw won a lot of races, but never Gent-Wevelgem. He landed on the podium three times – second in 1990, and third in 1994 and 2000 – and finished inside the top 10 eight different times.

Slowest edition of the past 30 years

In 2015, Gent-Wevelgem took place on a stormy day with strong winds and devastating gusts that blew Geraint Thomas off his bike and into a ditch. That didn't stop the Welshman, however, and he made the lead split with Niki Terpstra, Stijn Vandenbergh and Luca Paolini.

After Sep Vanmarcke and Jens Debusschere made it on, Paolini attacked with six kilometres to go, surprising his rivals and soloing in for what would be the last win of his career. He tested positive for cocaine during the Tour de France, was suspended and then retired after revealing a difficult battle with painkillers abuse during his career.

In 2000, Erik Zabel, then riding for Telekom, was in a chasing group 40 seconds behind the leaders with about 25km to go when a small black horse – startled no doubt by the helicopter overhead – broke out of its paddock and ran straight into the peloton, knocking Zabel down and then galloping alongside the racers.

Zabel was angry and shocked, but relatively unscathed, and the horse eventually missed a turn and trotted off into town.

Edvald Boasson Hagen was only in his second WorldTour season with Team Columbia-HTC in 2009 but had proven his mettle with stage wins at the Tour of Britain and Eneco Tour.

At Gent-Wevelgem he had a pair of super-helpers in George Hincapie and Marcus Burghardt who, when Boasson Hagen escaped with Aleksandr Kuschynski on the final ascent of the Kemmelberg, shut down every chase.

Boasson Hagen handily out-sprinted the Belarussian to take the biggest win of his career. He was just 21, the same age as Eddy Merckx, when he won Gent-Wevelgem in 1967.