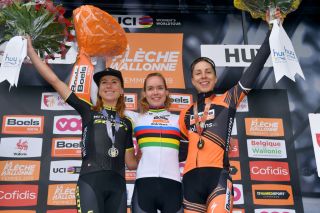 The La Flèche Wallonne Feminine is the oldest of the three one-day races that form the women's Ardennes Classics triple crown. The series has only been in place for women since 2017 when Amstel Gold Race Ladies Edition made its return after a 14-year hiatus, followed by the long-running La Flèche Wallonne, and the debut of Liège-Bastogne-Liège.

Since 1998, the women's peloton has been competing in their own La Flèche Wallonne Feminine and battling for the prestigious victory on the famed Mur de Huy.

This year's edition would have offered the women's field a 124km race starting in Huy. It would have also include climbs over the Côte de Warre, and twice up the three ascents; Côte d'Ereffe, a new climb Côte du Chemin des Gueuses (1.8km with an average gradient of 6.5 per cent) before tackling the steep slopes of the Mur de Huy.

The Flèche Wallonne Feminine is synonymous with names like Marianne Vos and Anna van der Breggen who have both won it on five occasions, and other multiple winners like Fabiana Luperini and Nicole Cooke.

Just one victory at La Flèche Wallonne is deserving of a prestigious place in the history books of women's cycling, and so, the women who earned that status too are Sonia Huguet (France), Emma Pooley (Great Britain), and Evelyn Stevens (USA).

Anna van der Breggen (Boels Dolmans) won the 2019 La Flèche Wallonne Féminine for the record fifth time in a row. She also tied up the score for the most wins, 5, with her Dutch compatriot Marianne Vos.

Van der Breggen and Vos would have gone into this year's edition of the race hunting that record-breaking sixth victory. They might get that chance if the race is included in a post-COVID-19 race calendar, but if not, the will have to wait for the 2021 edition to fight it out on the Mur de Huy.

Italy's Fabiana Luperini won the first edition of La Flèche Wallonne in 1998 and went on to take two more titles in 2001 and 2002 editions. Great Britain's Nicole Cooke is the only other rider to secure three wins having stormed to victory in 2003, 2005 and 2006.

Arndt placed second on one occasion and was third four times but never managed to secure a victory.

Former world champion Tatiana Guderzo has finished on the Mur de Huy 12 times. That was followed by a series of riders who have finished the race 11 times including Vos and Arndt, Loes Gunnewijk, Edita Pučinskaitė and Emma Johansson.

Germany's Judith Arndt has finished La Flèche Wallonne a total of 11 times and in 8 of those she finished in the top 10, but despite her best efforts, she never won on the Mur de Huy.

Arndt was one of Germany's most successful cyclists with career highlights that included a three world titles, two victories at Tour of Flanders, three overall victories at Thüringen, twice winner of the Montreal World Cup, twice overall winner at both Emakumeen Bira and Giro della Toscana.

Anna van der Breggen spent half of her twenties winning La Flèche Wallonne. She won her first title on the Mur de Huy in 2015 when she was 25 years old and continued that winning streak for the next five years, winning her most recent title last year at the age of 29.

Now 30, Van der Breggen would have been preparing for a sixth title at this year's La Flèche Wallonne but instead she had to settle for winning the virtual edition.

Young Canadian Genevieve Jeanson stormed onto the professional women's circuit after winning the junior road race and time trial world titles at the World Championships in 1999.

At the 2000 edition of La Flèche Wallonne, Jeanson took a solo victory on the Mur de Huy, 10 seconds ahead of Pia Sundstedt, Fany Lecourtois and Diana Ziliute at the age of 18 years and 227 days, more than a year younger than Marianne Vos was for her first win on the Mur.

Jeanson confessed in 2007 to using erythropoietin (EPO) during most of her career, beginning as a teenager in 1998 and through her early 20s until 2005.

She was subsequently issued a reduced 10-year ban for cooperating with an investigation conducted by the Canadian Centre for Ethics in Sport (CCES) into her allegedly abusive coach Andre Aubut and Montreal-based family physician Maurice Duquette.

Marianne Vos won the fastest edition of La Flèche Wallonne in 2009.  It was her third consecutive victory on the Mur de Huy, this time beating Emma Johansson and Claudia Hausler.

It was an aggressive race with multiple attacks early on that kept the speeds high during the women's race. The race shattered up the Mur de Huy with a lead group of five riders that included Vos, Johansson and Hausler, along with Noemi Cantele and Amber Neben. In the end, it was Vos who took the win.

The second edition of La Flèche Wallonne in 1999 was the slowest-ever edition won by Hanka Kupfernagel.

The race was held under terribly cold weather conditions with rain, snow and sleet, perfect conditions for a rider like Kupfernagel who also excelled in cyclo-cross.

There were several strong attacks throughout the race from Valentina Gerasimova, Mari Holden and Gabriela Pregnolato, but the dwindled peloton of roughly 60 riders made it to the base of the Mur de Huy together.

Kupfernagel attacked towards the top and kept the 50-metre gap until the finish. Her victory gave her the lead in the overall World Cup after four races.

The Flèche Wallonne Feminine has an average speed of 36.31 kph over its 22-year history.

Aside from Vos' speedy win in 2008, the speeds have been quite constant despite the race getting longer over the past decade. The longest edition in 2017 - 137km - was just below average at 35.8kph.

The Mur de Huy has always provided a selective finish but occasionally a group has made it to the line together. The 2013 edition saw Marianne Vos come to the line with Elisa Longo Borghini and Ashleigh Moolman-Pasio. This was Vos' fifth title on the Mur de Huy.

The had a six-second gap over the chaser group where Anna van der Breggen took fourth place.

Cyclingnews reported that group had split into three before the final 1,300m climb. Vos led out the sprint with 100 metres remaining and dropped her rivals. She had enough time to sit up and celebrate as the other two battled it out for the minor placings on the line.

"It may sound weird, in spite of everything, it's still exciting," Vos said. "Every time I win, it feels new again."

Sixteen seconds. That's it. The largest winning gap between first a second in the 22-year history of La Flèche Wallonne. It happened in the 2017 edition of the race won by Anna van der Breggen.

She won her third successive Flèche Wallonne Féminine after soloing clear on the approach to the Mur de Huy. In a repeat of Amstel Gold Race, the Dutchwoman claimed victory ahead of her Boels Dolmans teammate Lizzie Deignan, with Katarzyna Niewiadoma (WM3 Pro Cycling) placing third. She went on to win Liège-Bastogne-Liège in what was the first-ever complete Ardennes Classics.

Kupfernagel's 1999 victory was the second largest winning margin. The German all-rounder won by 13 seconds ahead of Edita Pučinskaitė and Cindy Pieters.