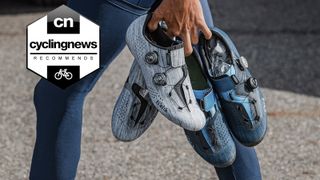 The phonetic spelling of the word ‘physique,’ Fi’zi:k (Fizik) is in the business of touchpoints: saddles, shoes, and handlebar tape.

Since 1996, the brand has been at the forefront of how riders interface with their bikes, the brand’s vast range of gear can occasionally be a bit difficult to make heads or tails of; so we’ve put together a handy guide to help you navigated the gamut of Fizik’s kit.

Fizik was infamous for classifying its saddles based on three animals; Chameleon, Snake, and Bull, each of which correspond to a different level of rider flexibility. While the animal kingdom has since been retired, Fizik is still producing top quality touchpoints for riders of all types.

Read on for a rundown of the Fizik range.

Best for those who only dream of touching their toes

According to Fizik, the Aliante is for riders with low flexibility, and the scoop-shaped saddle is best suited to riders who prefer a more upright position. With a wider profile at the rear and a kicked-up tail, the Alante comes in two widths; 128mm and 152mm and 279mm long.

Available at a range of price points, the Aliante 00 is the flagship model with a carbon shell and carbon rails, with the more budget-friendly Aliante R3 version sees a fibreglass co-injected Nylon shell and the brands Kium (alloy) rails.

Fizik also produces the saddle in an Open and a Versus Evo trim. Open sees an anatomical cutout which runs through the middle third of the seat. The Versus Evo sees a pressure relief channel that runs the entire length of the saddle.

Fizik has designed the Antares around riders with mid-range flexibility and low pelvic rotation while pedaling. Like the flexibility of the riders it’s intended for, the profile of the Antares is pretty neutral, with broad wings and a mostly flat profile.

Available in 141mm and 153mm widths the shell measures 276mm from front to back, and Fizik makes the saddle in both the Open and Evo trim. This is a saddle that the vast majority of riders will get along with. It should not come as a surprise that it’s the perch Fizik chose to launch it Adaptive 3D printed padding. Using a cutting-edge process that reads like something out of a science fiction novel, the padding is 3D rendered in a resin matrix that has allowed Fizik to precisely tune the level of support over the saddle's length.

Pancake flat, narrow and long, the Fizik Arione is for ultra-flexible riders. At 300mm in length, and with no contouring from the tip of the nose to the tail, it’s designed to allow the rider to move along the length. Measuring 126mm wide in the regular, while the large measures 140mm, it’s a decidedly narrow saddle, and upright riders need not apply.

As with the rest of the brand’s saddles, the Arione comes in Open and Evo versions, expensive full carbon trims, and more budget-friendly builds too. Fizik also makes an Arione Classic, with a slightly longer thinner nose, broader 136mm wings, and a higher profile.

Fizik's take on a women-specific saddle

Serving as Fizik’s Women’s road saddle, the Luce has a wider sitting area that tapers down towards the nose, which the brand says creates better weight distribution and less friction on the inside of the thigh.

The shell is made in three sections; a carbon-reinforced nylon pine spine co-injected with two panels of thermoplastic elastomer. The saddles see an elongated pressure relief channel and are available in carbon or alloy rails and two sizes; the regular width is 280mm long and 145mm wide, and Large, which is one millimetre longer and 155mm wide.

Short, wide and down for a long ride

Serving as the more endurance-focused of Fizik's snub nose range of saddles, coined Argo, the wide stout profile is designed to stabilise the rider while also relieving soft tissue pressure.

Measuring 250mm long and available in 150mm or 160mm widths, the Tempo Argo is a touch wider than the Vento version and sees Fizik's Type 2 foam formulation, which is not only thicker around the sit bones, but is also slightly softer than the padding used in the brand's race-focused saddles.

For riders who prefer a locked-in aggressive position

Every brand has its own take on the short, squat saddle, and the Vento Argo is Fizik’s take for the aggressive rider. The cutout is sizable and sees a dipped nose, which Fizik says supports the pubic ramus when the pelvis rotates forward in the ultra-aero positon.

Measuring 265mm long, the Vento Argo comes in 140mm and 150mm widths and is shod with Fizik’s thin Type 1 padding, which is ‘reactive and spring,’ but in reality, feels firm and supportive.

Built on top of Fizik's R2 sole — the stiffest carbon plate they make — the Venot Powerstrap R2 Aeroweave is a lightweight, highly vented race shoe. Instead of leather or microfibre, the upper is made from Aeroweave; a woven fabric made up of nylon fibres and thermoplastic polymer filaments. The material creates an open textile that allows for unmatched airflow but still has enough structure to provide much-needed support.

Rather than Boa dials or ratchet straps, Fizik has opted for trusty Velcro to cinch the shoes down. The instep and mid-foot are secured using different straps for a fully customizable fit, though the large elastic ribbons of velcro make on-the-go adjustments a bit more involved than a dial or ratchet. All up in size 42.5, the Vento Powerstrap R2 Aeroweave are claimed to weigh 205g.

Premium comfort and performance, but at a cost

Serving as the brand's more traditional top-end race shoe, the Infinito R1 sees a microtex laser perforated upper (the same material they use to cover their saddles), dual Boa closures, and an ultra-stiff UD carbon outsole. Fizik has employed what it calls Dynamic Arch Support Technology and the Increased Volume Control System, which shapes the upper around every nook and cranny of your feet.

The BOAs are situated on the outside of the foot and use textile loops to guide the wires rather than the plastic anchors seen on many shoes. Using the brand’s R1 Sole, Fizik doesn’t actually assign a stiffness index, they are plenty rigid to please top WorldTour pros, and our own Josh Croxton. That said, if you like to run your cleats slammed back, these probably aren’t the shoes for you.

The Aria R3 is the benefactor of trickle-down technology borrowing many of the features from the Infinito R1, but with a slight heavier and more pliable sole.

The Aria sees a laser perforated Mictotex upper with dual Boa dials and the same wrap around Enahced Volume control design. Fizik slots in the slightly cheaper R3 sole, which again doesn’t have a stiffness index, but is still made from unidirectional carbon fibre has a replaceable double heel stud.

While the Tempo Overcurve sits in the middle of Fizik’s hierarchy of performance shoes, it’s still pretty techy. The upper is made with TPU coated mesh which allows for plenty of airflow, but maintains structure in critical areas to support your foot. A single Boa dial reigns in the shoe, with the cable routing following what Fizik calls its Overcurve pattern. Here the collar that wraps around the ankle is staggered to allow the joint to flex uninhibited.

All of this sits on top of the R4 outsole, a carbon composite plate that strikes the right balance between stiffness, damping, and price. According to Fizik, the R4 sole has a stiffness index of 7 and features has molded sizable vents in the sole. Fizik offers this shoe in a narrow and wide last and some loud and lairy colour options, too.

Expensive look and feel without the price

Following the same design as the Tempo Overcurve R4, the R4 replaces the TPU coated weave with a laser-perforated microtex upper, and adds a Velcro strap across the toe box to complement the Boa IP1 dial.

Using the same foot wrapping dual velcro closure as the top end Vento R2, the Tempo Powerstrap R5 sees dual hook and loop straps that wrap around the fool to provide customizable support for the instep and midfoot.

The upper is made from the brands Microtex microfibre, while the sole is the wallet friendly R5 nylon plate.

Snow boots you can ride in

Made for tackling the worst winter can throw at you, the Artica R5 wraps your foot in a waterproof and insulated upper, make sure your toes stay toasty warm — even the zipper is waterproof. Under the element-stopping outer shell is a speed lace closure that makes for even pressure across your foot and no hotspots when zipped up.

Underneath it all is the R5 nylon sole, which may not be the stiffest the brand offers, it also does not conduct cold the same way that carbon fibre does, meaning your feet stay warmer.

Low Stock
$27.99
View at Chain Reaction Cycles
$31.49
View at Wiggle
No price information
Check Amazon
Sticky finish
Not much in the way of padding

Available in every colour under the sun, the 2mm is Fizik’s thinnest tape. Made from their infamous Microtex, the tape is finished with a sticky, non-slip surface, and a raised texture to ensure maximum purchase no matter the weather.

Microtex is the thinnest lightest race ribbon that Fizik makes; however, the Tempo classic is for those who prefer a more traditional feel. Still 2mm thick, the perforated tape feels a bit more like leather but doesn’t do much in the way of dampening.

Adding a millimetre of thickness, the additional mid-padding polymer deadens some of the road buzz and shock. Fizik makes the Tempo Bondcush tape in classic and soft-touch variety.

Best for those who want maximum comfort

Thick and sticky, the Terra Bondcush tape is designed for those who frequent rough roads. The Bondcosh padding is bonded to a micro text outer layer and backed with a sticky gel, which removes the need for adhesive, whole also further damping road chatter without feeling too squishy. All of this is topped off with a tacky, nonslip finish.