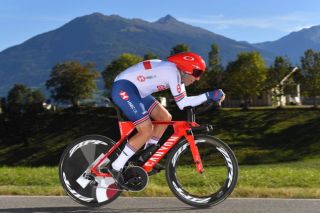 “I think ICA is a very progressive team with a focus on performance without compromise,” Dowsett said in a statement released by his future squad.

“There seems to be modern-day thinking. As a rider, that is all I ask for. I also think a name change should be considered. A step up to the World Tour surely means Israel Cycling Academy has graduated from an Academy to a great team now."

Dowsett has dreams of making the Great Britain team for next year’s Olympic Games in Tokyo and he boosted his chances of make the squad after finishing fifth in the time trial at the World Championships in Yorkshire. The time trial and prologue specialist believes that his new team will give him the backing to focus on the Tokyo Games.

"I am looking forward to it and strongly focused on the Olympic Games. Obviously, I first need to get selected for the national team. Afterward, I want to win the gold medal in Tokyo. Israel Cycling Academy is a perfect fit for these goals."

Israel Cycling Academy has bolstered their ranks with a number of high-profile signings since the transfer window opened on August 1. Daniel Martin has joined from UAE Team Emirates, while Andre Greipel moved across after nullifying his contract at Arkea earlier this year.

"I will be part of a great team that has improved amazingly over the last few years. I want to share my experience to strengthen the team. We can reach all our goals and share our successes. I want to perform to my best level, and I am looking forward to working for the team leaders."