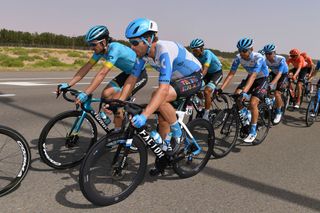 For the second time this year, Alex Dowsett has gone to a bike race and found himself at the centre of a coronavirus scare. And for the second time in a year, he has been forced to travel home without completing a race.

The first occurrence took place at the UAE Tour in February, when Dowsett and the rest of the peloton found themselves politely forced into lockdown and blocked in their hotel, when a batch of suspected COVID-19 cases cropped up mid-way through the race.

Dowsett hasn't raced on the road since then. Instead, he's fluttered his days away with training and dabbling in online racing. But at the weekend he carefully made his way from his home in Andorra towards northern Spain for the resumption of racing at the Vuelta a Burgos, and what he thought would be a tough, but well-needed, stage race as the season opened up once more.

Then suddenly the Israel Start-Up Nation rider found himself back in the car and driving the six-hour haul home.

The only pedals pushed in anger were those in his car after Omer Goldstein – a teammate not at the race – had tested positive for COVID-19 and sparked a chaotic period in which both Dowsett and another teammate, Itamar Einhorn, were subsequently tested, isolated and eventually pulled from the race.

Both riders would test negative for the virus, but with their results not returned until after stage 1 of the race had started, Israel Start-Up Nation were left with little option but to move swiftly and sensibly.

"I seem to be a rider who has been significantly affected by corona but yet to actually get it," Dowsett told Cyclingnews.

"I got to Burgos by trying to avoid planes and airports as much as possible. Burgos was an easy one to get to because I could do the drive in about six hours, and I dropped in on Saturday. I had dinner with the team and everyone had gone through the protocols for the race. Itamar had a negative test on Friday, as had I, but we had dinner, had breakfast the next morning, and then went for a bike ride," he explained.

"Then, during the ride, Itamar got a call telling them that Omer had tested positive and 'Ita' had spent the day with him on Saturday.

"We knew straight away that Itamar would not take the start, and we were both isolated immediately. There were question marks over me because of the incubation phase. We knew the chances of me catching it were slim, but, with the pro peloton, even if there's a slim chance, you just need to realise that there's another bike race. You just don't take the risk."

'This is much bigger than bike racing'

Professional cycling has taken immeasurably bold steps as it looks to resuscitate the 2020 season, but each decision on the road to a resumption of racing involves risks. Some of those risks are mitigated or reduced by the strict UCI protocol, but as the virus continues to circulate, there are no foolproof plans.

From Dowsett's point of view, riders and teams are walking a fine line as they balance the desire and need to race with their responsibilities over health. And when instances like the one at Burgos occur – and they will throughout the coming months – Dowsett believes that caution is the best way forward.

"I wouldn't want to be responsible for even the slimmest of chances by being irresponsible and subsequently causing a risk to not only the peloton but also their families. Some of the younger riders might live with their parents, and this sort of thing is much bigger than bike racing," he said.

"If you stop racing completely, you could destroy cycling – you could destroy a sport and hundreds of thousands of jobs within the sport. There's also the element that there's also a global pandemic at the moment, and the health and safety of people is of paramount importance."

If there's any silver lining for Dowsett – other that testing negative – it's that he can line up for the first time at Strade Bianche at the weekend. It's a race he's followed from afar over the years, and watched on enviously as other riders take on the dirt roads.

"It's always been a race that I've wanted to do since it started," he said. "It would have been nice to have had a stage race in my legs, but Strade is an experience as well as a race, so it will be good to get stuck into it. We're all part of the pandemic and we need to respect it."