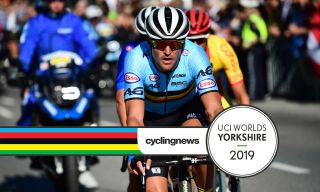 Having long dictated the terms of engagement in Belgian one-day races, it was perhaps only to be expected that Deceuninck-QuickStep would eventually serve as a template for the Belgian national team. While other countries are building their plans for the World Championships elite men's road race around a sole leader, the power of Rik Verbrugghe's Belgian selection appears to lie in its collective.

By dint of their exploits this season, Mathieu van der Poel (Netherlands) and Julian Alaphilippe (France) top the list of favourites for the Yorkshire Worlds, while the track record of reigning champion Alejandro Valverde (Spain) and three-time winner Peter Sagan (Slovakia) means they will inevitably be factors once again. All four will be backed without question by their national teams on September 29.

For Belgium, the situation is a little different. Although the recent form of Philippe Gilbert and Greg Van Avermaet marks them out as contenders for the rainbow bands, neither man will count on the devoted support of an entire team, despite winning two stages of the Vuelta a España and the Grand Cycliste de Montréal, respectively, Instead, as Van Avermaet explained in Canada last week, Belgium will seek to take advantage of their numerical strength.

"I think we have to be strong all the race, we can play a lot of cards. If we come in a good group with the right rider, we can play this card and see how the race develops, whereas other teams have just one card to play," Van Avermaet told Cyclingnews.

"We have to do it kind of in the QuickStep way. They always have the advantage of having a few strong riders and they take advantage of that. This year, we don't have one really big leader who stands out, but I think that's the best reason to play with multiple cards and then see who is strongest in the end."

Belgium's depth is illustrated by a glance at the quality of riders who won't make the trip to Yorkshire next week, with Tiesj Benoot (Lotto Soudal), Jasper Stuyven (Trek-Segafredo) and Sep Vanmarcke (EF Education First) all deemed surplus to requirements.

Van Avermaet and Gilbert may be the nominal leaders, but the whole line-up is brimming with ambition, as exemplified by the 19-year-old Evenepoel's half-joking comment about his prospects: "It will the longest race I've ever done, but then we said that before San Sebastian, too, and I won."

At Deceuninck-QuickStep, it is relatively straightforward to temper personal ambition for the common good when there is every chance the favour will be returned at the very next race. Such harmony is surely more difficult to achieve on a team that comes together for a one-off event like the Worlds.

Even so, Van Avermaet is confident that Belgium can avoid internecine strife of the kind displayed by Benoni Beheyt and Rik Van Looy in Ronse in 1964, or – more ruinously, given that the rainbow jersey eluded them – by Eddy Merckx and Freddy Maertens in Barcelona nine years later.

"We have some good riders, riders who have quite a big palmarès, but we also know each other long enough already for many years," Van Avermaet said. "I think you just have to be honest with each other and see how the race develops. I think everybody agrees with this kind of strategy, it will not be a problem. First, you have to make it to the selection and then you have to see how the race goes."

Belgium have claimed just one medal – Tom Boonen's bronze in 2016 – since Gilbert was crowned world champion in Valkenburg 2012, but their light blue jerseys are almost always a factor at the Worlds. Three years ago in Qatar, for instance, they played a dual role, splitting the peloton to shards in the crosswinds early on and then controlling the remnants to tee up the reduced bunch sprint on the finishing circuit.

In Yorkshire, it appears that Belgium will play the role of aggressor, leaving it to nations such as France and the Netherlands to police the peloton. The idea, easier written than done, is to have a rider in every move.

"If you have someone like Alaphilippe in your country, then it's quite clear that you have to make the race and work for him," Van Avermaet said. "But at the moment, we don't have this kind of guy, so we have to play with our strength in numbers. We have to go there and use the other nations a little bit. I think they're going to control for Van der Poel or Alaphilippe, so we have to be always on the front of the race, and awake that we don't miss anything."

For all the depth in the Belgian team, two names stand out, by virtue of both pedigree and form. Gilbert claimed the rainbow bands seven years ago, while Van Avermaet is the Olympic champion, and both men have underscored their status with prestige wins in recent weeks.

At Lotto a decade or so ago and again during their time at BMC, they struggled to pull in the same direction, which eventually resulted in a Solomonic judgment from team management. It was decreed that they divide the calendar between them, with Gilbert skipping the cobbled Classics altogether for four years.

Yet even through that particular cold war, they continued to line out side by side for the national team. Van Avermaet was part of the supporting cast that helped to set up Gilbert's onslaught on the Cauberg in 2012. Gilbert was on hand when Van Avermaet secured Olympic gold in Rio four years later.

"Ok, it was sometimes not easy in our career because we are the same kind of rider, but it's not like we had a conflict with each other," Van Avermaet said. "I think the circumstances made it that we both had ambition, and that can be a problem: too much ambition under one roof was too hard, but I think we both have a lot of respect for each other."

In Yorkshire on September 29, Van Avermaet and Gilbert's ambitions will have to cohabit rather than clash. They must tread a fine line between personal goals and team allegiance. Do it the QuickStep way, in other words.

"I always have had respect for Philippe, and I think that's made it easier when we've become older. When he was 27 and I was 24, it was maybe harder to understand each other," Van Avermaet said. "But now we're at an age where we respect each other a lot and we can work with each other. In the end, we can only help to make each other better."