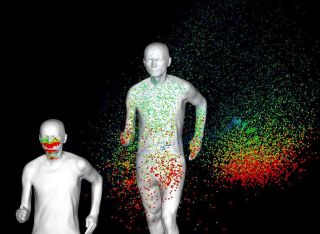 Ever since the New England Journal of Medicine published a study of the COVID-19-causing coronavirus' stability on surfaces and in the air, the debate about whether it is safe to exercise outside has intensified.

A graphic from the Belgian team of experts in aerodynamics who examined the most efficient descending styles and offered wind tunnel services to many riders, sought to answer this question. And their social media post and report that suggested the virus can travel well beyond the World Health Organisation's 'safe' two-metre physical distancing recommendation has gone more viral.

So is it safe to cycle outside? Cyclingnews looks at this new study published on LinkedIn.

The SARS-CoV-2 virus that emerged from Wuhan, China last December and which has since caused a pandemic that cost the lives of over 100,000 people worldwide, has been the subject of unprecedented scientific study, sharing of data and rapid publication. The entire genome has been sequenced and the mechanism of infection detailed but as of yet, there is no effective cure or vaccine for the disease.

Because most countries have been unable to do extensive testing, contact tracing and quarantining for the virus that could halt the pandemic, much of the world has gone under voluntary lockdown. The fact that people can be infectious before showing any symptoms has only accelerated its spread. There are numerous estimates of what proportion of infected people are asymptomatic, but the Centers for Disease Control put that number at upwards of 25 per cent.

The best answer to stopping the virus' spread is 'social distancing' - or more accurately, physical distancing: staying two meters away from anyone who's not in your household in addition to proper personal hygiene. More recently countries have started recommending people wear face masks when going out in public.

Does that mean we need to wear one on the bike or while walking or running?

The above graphic, created by Bert Blocken's team at the Eindhoven University of Technology, went viral before the full paper was made public. It showed a simulation of a runner emitting droplets and how these could land in the path of another runner in their slipstream. Runners jogging side by side had less of an issue.

It was an attempt to answer the question that has previously remained unanswered: what does physical distancing need to look like when people are moving. However the well-intended study created plenty of fear and raised the hackles of epidemiologists.

For some, it was a confirmation of beliefs already strongly held that any non-essential outdoor activity is an unnecessary risk. There has already been harassment and even violence against people taking to the streets to get some much-needed exercise and relieve the stress of living in unprecedented times.

Blocken insisted that he wants people to keep exercising while keeping his simulations in mind.

"Keep exercising but stay outside slipstreams," Blocken wrote on Twitter.

What we know: COVID-19 is spread through droplets

It has been established that the respiratory virus is spread from one infected person to others mainly through droplets emanating from a cough or sneeze - ie. direct contact. It is not known how frequently it is spread through indirect contact - picked up from surfaces where droplets from infected people have landed - but the NEJM study showed the virus can last for days on some surfaces like glass, metal and plastic and hours on paper and fabric.

That study also showed that the virus can be stable in aerosols, but it is not yet known if the virus is actually spreading through these tiny vapour particles that might evade gravity.

In an interview with YouTuber 'Asian Boss', Kim Woo-Joo, a professor of infectious diseases at the Korea University College of Medicine who has been studying COVID-19, gave an excellent explanation of the modes of transmission of the virus, saying that airborne transmission is uncommon.

The most common route for COVID-19 transmission is by droplets - mucus of five microns or larger - either by an infected person sneezing or coughing within one to two meters of someone," Dr Kim explained.

"So when you cough or sneeze, you produce droplets. It has to be bigger than five microns to be considered a droplet," he explained. "And one droplet from the infected patient contains many viruses."

Gravity will pull a droplet to the ground after it arcs from a sneeze between one and two metres away. If you're closer than that to the cough "the virus can infect our eyes, nose or mouth through the mucous membranes."

A second route for COVID transmission is picking up the virus from surfaces near where an infected person coughed or sneezed, but in very rare instances it can be transmitted by air.

It is important to note that the instances of suspected transmissions of COVID-19 by aerosols - hospitals where patients are intubated, a religious group in South Korea, a choir in Los Angeles - were in enclosed rooms, not outdoors.

"Usually in our everyday lives, you get infected from droplet transfer, direct and indirect contact. That being said, you can get infected through the air in certain circumstances," Dr Kim says.

"We all spit, even when we talk normally. But if you are singing and shouting you are going to get a lot of droplets. Remember how I said a droplet is bigger than 5 microns? When people are shouting and screaming, gravity doesn't pull all the spit down."

Other studies have measured the droplets coming out of people's mouths when talking and found that louder people emit more droplets. Put a lot of people in the same room talking at the same time - like a noisy restaurant, a church service or night club - and one infected person can spread the virus more easily.

"That's airborne transmission. This is why isolated gathering places like churches, bars, restaurants or any densely-packed area where people are shouting or eating are at risk. But in regular outdoor environments like parks, hiking trails, because they are not in a closed space, airborne transmission is very unlikely."

Transmission on the move?

We know the virus is spread by droplets and we know to stay two metres apart in the grocery store but being trapped in the house for months is not going to be healthy for the public - exercise is important, being sedentary is bad, and the home trainer and digital platforms like Zwift can only go so far in keeping you sane.

Yet science hasn't covered what is a safe physical distance between cyclists or runners. That is what Blocken and his team set out to investigate using fluid dynamics.

The 1.5-meter recommendation for social distance has been defined for persons that are standing still, Blocken emphasized in the paper.

"It does not take into account the aerodynamic effects introduced by person movement, such as walking fast, running and cycling. This aerodynamics study investigates whether a first person moving nearby a second person at 1.5 m distance or beyond could cause droplet transfer to this second person."

A simple calculation shows even two metres at speed might expose someone behind you to your droplets. At a moderate pace of 30kph (8.3 meters per second), someone two-metres behind would be precisely where you were 0.24 seconds later. Droplets take more than half a second to land on the ground. Although wind speed, humidity, temperature can all play a part in where your droplets go.

Blocken and his team looked at a very narrow simulation of the movement and evaporation of micro-droplets in airflow using computational fluid dynamics of a runner at different paces. They found that with a slipstream, a much larger distance is needed to avoid exposure - up to five metres (16 feet) at a fast walking pace.

"The results indicate that the largest exposure of the trailing person to droplets for walking and running is obtained when this person is in line and with leading person and positioned in the slipstream of this person.

"Exposure increases as the distance between leading and trailing person decreases.

"This suggests that avoiding substantial droplet exposure in the conditions of this study can be achieved by one of two actions: either by avoiding to walk or run in the slipstream of the leading person or by keeping larger social distances, where the distances increase with the walking or running speed.

What does it all mean?

We all want the pandemic to get under control so we can resume a normal life, but without knowing who exactly is infected and who to avoid we're in the terrible position of having to act as if we we are infected but the last thing we want to get into the habit of is treating our fellow humans as pariahs.

The Blocken paper is an interesting study that can serve as a guideline for exercising outside but what it is not is any evidence whatsoever that SARS-CoV-2 is spread by aerosols in the outdoors.

While this isn't good time to blow snot rockets, spit, or jump on the wheel of random people on the bike path, please remember, we are distancing ourselves to prevent more disease and deaths, not because other people are an immediate danger.

The virus has to get to your mucous membranes - your nose, mouth, or eyes. Even if you're in the slipstream of someone who coughs and is infected, science has not yet determined how many virus particles are needed to cause disease.

If it makes you feel safer, wear a mask and as always, avoid touching your face while out and wash and disinfect your hands when you get home.

This is a stressful time for everyone so please treat each other kindly if you pass one another outdoors.