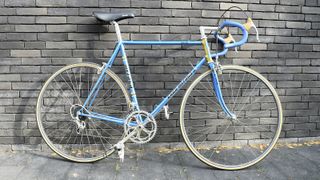 Allan Peiper is a retired Australian cyclist and team director who, in 1977, moved to Belgium at the age of 16 in order to pursue a career in the sport. After initial success  he returned home before coming back to racing in 1980 and to Europe in 1982.

Cyclingnews was fortunate enough to spend some time with Peiper at his home, where he showed us a couple of his favourite bikes.

The Koga Miyata brand was formed as a partnership between Dutch brand Koga and Japanese brand Miyata. Although the partnership ended in 2010, both brands still exist separately and continue to thrive to this day.

According to Peiper, this Pro Luxe came about after he asked Erik Zabel if he could hunt down a Campagnolo Record groupset with the 'cobalt blue stone on the brakes'. Unsure of its exact origin, Peiper had been fond of this particular iteration of Campagnolo's Record brakes since the mid-eighties. The Campagnolo Cobalto brakes were launched in 1986 as a replacement for the problematic C-Record brakes, and coincided with the 50th anniversary of Super Record.

A few weeks later, Zabel enquired as to which bike Peiper was riding at the end of his career, asking which saddle, handlebars and groupset he used, and for which team. Peiper obligingly answered.

Peiper told Cyclingnews: "I didn't think any more of it, but a couple weeks later I went to Liège–Bastogne–Liège and there was a bike standing there, and a mechanic said, 'Erik Zabel dropped off this bike for you – it's a present.'

"It's sort of a replica of the bike I rode at the end, but with the Campagnolo brakes and a few other odd parts. It's pretty dear to me. Receiving presents is always a big thing in your life, but getting a bike as a present is pretty amazing. Especially something like this."

The bike is a 56cm steel frame made from Japanese Tange steel tubing. While it is predominantly specced with Campagnolo Record, there is a smattering of Shimano to complete the build. The bike spins on Mavic GP4 rims with Mavic hubs.

The chainset is Shimano 600, with 52/42 chainrings; this is paired with a 13-21, six-speed cassette and KMC chain. The derailleurs are Campagnolo Record, controlled by Shimano Dura-Ace down-tube shifters.

In terms of finishing kit, Cinelli provides the handlebars and quill stem, with leather bar tape and, at the back, a Turbo saddle is perched upon a Campagnolo seat post with flutes, which Peiper states he would paint as an easy way to customise his bike.

This Petrus was hand-built for Peiper by Peter Brotherton, who was an Olympian in the Melbourne 1956 Games and a silver medal-winning pursuit rider at the 1954 Track World Champioinships.

After the Olympics, Brotherton, from Lincolnshire, England, stayed in Australia and turned his hand to building frames, as well as looking after young riders – one of whom was Peiper.

Peiper claims Brotherton was the leading bike builder between the late 1970s and early 1990s, and that, thanks to his eccentricity, he acquired the nickname 'The Prof'. He had a shed full of junk in his garden where he would build frames but, unfortunately, this shed burned down, bringing Brotherton's bike building days to an abrupt end.

This Petrus frame was built for Peiper in 1980, and was raced throughout the 1981 season, before later being upgraded with a Shimano 600 groupset. Later still, Peiper had the frame refurbished and restored to its former glory, refitting the iconic groupset.

Amusingly, Peiper spent a few years without this bike, after his mother gave it away. It took years to track down the new owners but, eventually, he was reunited with the bike – a machine with deep-rooted emotional significance for him.

The frame, which is a size 56cm, comprises Reynolds 531 tubing. The bike is specced with a Shimano 600 groupset throughout with 52/42 chainrings paired with a 13-18 cassette. The wheels, made up of Mavic rims laced to Shimano 600 hubs, have been wrapped in Continental tyres.

The handlebars and stem are from Cinelli and Peiper's preferred Turbo saddle is paired with another fluted seat post – this time a Dura-Ace from Shimano. Modern Dura-Ace pedals are fitted for logistical purposes, enabling Peiper to ride the bike with his usual cycling shoes. Originally the bike would have been fitted with toe-clip pedals.

Thank you to Allan Peiper for taking the time to speak with Cyclingnews.