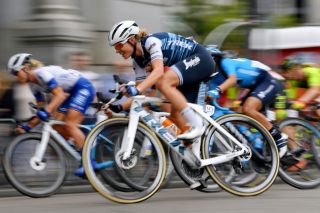 The Trek-Segafredo Women's team was launched in 2019 as a sister squad to the men's WorldTour outfit. The all-star roster includes former world champions Lizzie Deignan and Ellen van Dijk, Elisa Longo Borghini and veteran Trixi Worrack along with new rider Lucinda Brand, who boosts the team's Classics and sprint power.

The team was ranked third in the UCI Women's WorldTour in their first season, with Deignan winning the Ovo Energy Tour and Longo Borghini taking home the top prize in the Emakumeen Bira. Longo Borghini was the team's top rider in the individual ranking in 13th.

Trek-Segafredo had a strong start in the Tour Down Under, with young Italian Letizia Paternoster taking a stage win in the opening day and taking the GC and young rider's classification lead. The squad took three stage wins in the early season Setmana Ciclista Valenciana stage race, with Ruth Winder taking the opener and Lotta Henttala (née Lepistö) winning two stages.

Audrey Cordon-Ragot opened the team's account in the one-day races, winning Drentse Acht van Westerveld, while Van Dijk followed with a victory in Dwars door Vlaanderen. Paternoster had a fine podium finish in Gent-Wevelgem and Van Dijk was third in the Ronde van Drenthe and fifth in the Tour of Flanders. The team had little luck in the Ardennes Classics, however, with Deignan's seventh place in Liège-Bastogne-Liège their top results.

Deignan showed sparks of her former power with a fine stage and overall win in the Ovo Energy Tour, but the team ran into trouble near the end of the season. After taking out the Postnord Vårgårda WestSweden TTT, Van Dijk crashed in the Boels Ladies Tour and suffered serious fractures to her pelvis and humerus that left her wheelchair bound for several weeks. It seemed to take the wind out of the team's sails and Longo Borghini's second place in the Giro dell'Emilia was the best result

Lizzie Deignan: Former world number one Deignan made her comeback from having her first child in 2019, and although she was at the same level as before she retired, the level of her peers had gone considerably up. The Briton will be under pressure to improve and is targeting the Classics, Giro Rosa and Olympic Games in 2020.

Elisa Longo Borghini: Longo Borghini is consistently there or thereabouts in all the major races but like the rest of the peloton is up against the strong Dutch riders in Van Vleuten, Vos and Van der Breggen. She had a brilliant ride in the Emakumeen Bira on the climb to Santa Teodosia with teammate Wiles and will profit from the reinforcements in 2020.

Ellen van Dijk: Van Dijk is a powerhouse rider, able to ride on the front for kilometre after kilometre, attack, chase and even sprint for wins. Her strength is in the individual and team time trials and is the reigning European Champion.

Lucinda Brand: Brand in addition to being a top cyclo-crosser in the off-season is an aggressive rider on the road, able to parlay long attacks and a powerful sprint into stage and one-day wins. She's won three stages of the Giro Rosa.

Ruth Winder: The US road champion won everything there was to win on home soil before launching her European career, first with Sunweb and now with Trek-Segafredo. She is a breakaway artist and strong prologue rider, having been a part of the US team pursuit squad in Rio.

Having Van Dijk injured took away the team's biggest engine, but the Dutchwoman has been working diligently on rehab and should have no trouble getting back to top form. Meanwhile, Brand is a strong addition with similar qualities to her compatriot.

The team is never afraid to go on the attack, and Brand will be no exception. US champion Ruth Winder, Tayler Wiles, Henttala, Van Dijk and Brand can tear a race apart and Longo Borghini, Deignan and Paternoster are closers.

With the majority of the team returning in 2020 [Swiss mountain biker Jolanda Neff and Ellen Noble are replaced by young rider Elynor Bäckstedt and Brand] expect the cohesiveness to improve and be parlayed into more victories.

With riders of the quality of those on Trek-Segafredo, it's hard to isolate a weakness. If anything, few teams can go up against the likes of Annemiek van Vleuten, Anna van der Breggen and Marianne Vos unless they are able to throw numerous attacks that wear down their teams. If Van Dijk struggles at all to find her form it will be a big blow for the team.

The ever-consistent Longo Borghini gets a lift from the addition of Brand and Bäckstedt – the bronze medalist in the junior world time trial championships, and if Deignan can up her form the team will be formidable. With further development from Paternoster in the sprints and a continued aggressive strategy, Trek-Segafredo's line-up is on par with rivals Boels Dolmans, CCC-Liv, Mitchelton-Scott and Sunweb.