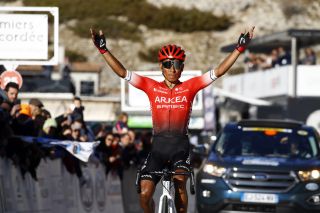 It was on the slopes of Mont Ventoux in February that Nairo Quintana offered the first firm indication that his move to Ark­éa-Samsic might herald something of a reboot. The Colombian soloed clear to win at Chalet Reynard and seal overall victory at the Tour de la Provence, before adding equally dominant mountain-top wins at the Col d'Eze and La Colmiane, at the Tour des Alpes Maritimes and Paris-Nice, respectively, in the weeks that followed.

Quintana returns to the slopes of 'The Giant of Provence' on Thursday for his first competitive outing since the season was halted by the COVID-19 pandemic, lining up as the marquee attraction at the second edition of the Mont Ventoux Dénivelé Challenge.

After years of labouring in the colours of Movistar with diminishing July returns, Quintana looked to have recaptured the more lightly worn virtuosity of his youth in the opening stanza of this interrupted campaign. All eyes will be on the Colombian on Mont Ventoux, where he will look to pick up where he left off in spring as he builds towards the Tour de France.

Even a partial ascent of Mont Ventoux, like the one claimed by Quintana at the Tour de la Provence, is a robust test, but the Mont Ventoux Dénivelé Challenge offers a rather more severe examination.

The race features two ascents of Le Mont Chauve, with riders climbing as far as Chalet Reynard on the first lap, before they ascend all the way to the exposed summit on the second time around. That Ventoux doubleheader is preceded by the Col de Fontaube and a largely undulating run towards Bedoin, making for a 179km race with some 4,000m of total climbing.

Quintana returned to Europe at the end of July aboard a charter flight with his fellow Colombian professionals, including defending Tour de France champion Egan Bernal (Team Ineos), who is already off the mark in this restarted season with a stage victory at the Route d'Occitanie.

Thirty-year-old Quintana will doubtless hope to respond in kind when he resumes his campaign on Thursday, although it remains to be seen what impact a training crash in late June will have had on his preparation.

There will, in any case, be no shortage of competition. Like so many races this month, the field for the Mont Ventoux Dénivelé Challenge is deeper than one might ordinarily have anticipated, as riders scramble for racing miles ahead of the rescheduled Tour.

Inaugural winner Jesus Herrada is back together with his Cofidis teammate Guillaume Martin, and Romain Bardet (AG2R La Mondiale), second a year ago, is in action after a relatively encouraging return to racing at the Route d’Occitanie.

Fabio Aru (UAE Team Emirates) showed signs of form at the Vuelta a Burgos last week, and he will hope for more on the Ventoux, where he is joined by Joe Dombrowski, while Miguel Angel Lopez (Astana) will hope to bounce back quickly after he disappointed at the Route d'Occitanie.

There was little to separate Trek-Segafredo's Tour leadership tandem of Richie Porte and Bauke Mollema on the slopes of the Col de Beyrède at the Route d'Occitanie, and the pair will hope to continue to improve both here and in the Tour de l'Ain, which follows immediately afterwards.

Indeed, while last year's inaugural Mont Ventoux Dénivelé Challenge took place the day after the Critérium du Dauphiné, as a sort of low-key epilogue to the week's racing, the revisions to the UCI calendar mean that the 2020 event serves as an especially vigorous warm-up for the three-day Tour de l'Ain (August 7-9).

The positioning, for this year, at least, puts one in mind of the old Classique des Alpes, which was held on the day preceding the Dauphiné from 1991 to 2004. And, like the Classique des Alpes, not all of the star names from the Tour de l'Ain will partake in the ascent of Mont Ventoux.

Team Ineos and Jumbo-Visma opted not to add the Mont Ventoux Dénivelé Challenge, meaning that Bernal, Geraint Thomas, Chris Froome, Tom Dumoulin, Steven Kruijswijk and Primoz Roglic will all enjoy a day of rest on the eve of the Tour de l'Ain.

The focus is understandably on the final haul to the haunting summit of Mont Ventoux, but there is scarcely a metre of flat to be found across the 179km race, which gets under way in Vaison La Romaine, and tackles the gentle 7km ascent of the Col de Fontaube in the opening hour of racing. The route winds throught Sault and Villes sur Auzon before reaching Bedoin for the first of two ascents of Mont Ventoux.

On the first time up, riders make the seemingly interminable grind through the forest for a 15km ascent as far as Chalet Reynard before they swing off and descend to Sault. They then circle back around to Bedoin to tackle the same forested road to Chalet Reynard all over again before continuing onwards on the empty expanses of the upper reaches of the Ventoux.

The full climb of Mont Ventoux is 21km in length to an altitude of 1,912 metres, with an average gradient of 7.5% and maximum pitches of 10.5%. There are higher mountains and steeper roads to be found in professional cycling, but raw numbers tell only a part of the story. History and myth coalesce somewhere along that lonely road that snakes towards the summit. Nowhere in cycling seems to hold quite the same mystique as Mont Ventoux.