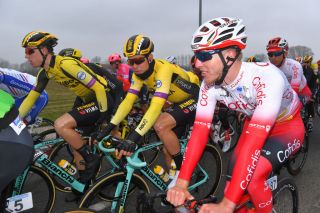 Former pro cyclist Zico Waeytens, who has taken up boxing since his retirement last season, offered a less-than-diplomatic response to Gianni Moscon's tossing a bike in anger at one of Waeyten's Belgian compatriots during last weekend's Kuurne-Brussell-Kuurne.

"Hi @GianniMoscon if you ever throw a bike again to a friend... I will put you between your frame and it will take me exactly 6sec. to do it ! Kind regards," Waeytens wrote on Twitter in an update posted Sunday evening.

Debusschere on Moscon's disqualification: 'It's a series of incidents and it's always the same guy'

Moscon (Team Ineos) was caught up in a crash with around 70km remaining in Kuurne-Brussell-Kuurne and fell into a ditch along with a number of other riders.  Venting his frustration, he picked up a bike and threw it at a B&B Hotels-Vital Concept's Jens Debusschere, a former Belgian road champion. The episode was caught on video, and within minutes the UCI commissaires disqualified Moscon from the race.

Debusschere, who had scratches and a cut on his hand and wrist as he was standing next to the team bus after the race, told Cyclingnews he didn’t crash but rather tumbled into the ditch and was crawling back out when the incident occurred.

"Then I had a bike – not even mine – thrown straight to my head," Debusschere said. "I had to raise my hand to protect myself in order not to get it into my face. The bike hit me with the chainwheel. At that moment I could have punched him. You’re full of adrenaline, but then you realise that the best thing you can do is get back on your bike."

Gabriel Rasch, Team Ineos' lead director at Kuurne-Brussell-Kuurne, told Cyclingnews and The Cycling Podcast that after reviewing the footage of the incident with officials he agreed with their decision to disqualify Moscon.

"I agree with the decision – it’s not something that should happen," Rasch said.

This is not the first time Moscon has exhibited behaviour that wasn't appreciated by his colleagues. He was expelled from the 2018 Tour de France for aiming a punch at Elie Gesbert, while in 2017 he racially abused Kévin Reza at the Tour de Romandie. He was also accused of deliberately causing Sebastien Reichenbach – a teammate of Reza – to crash and break his hip and elbow at the 2017 Tre Valli Varesine, though he was later cleared due to a lack of evidence.

Following the incident with Reza, Team Ineos suspended Moscon for six weeks and sent him on diversity training. After the punch at the Tour, he was suspended for five weeks by the UCI. Team Ineos have not commented whether there will be sanctions for Moscon within the team in regard to this latest disqualification.

"It’s a series of incidents and it's always the same guy," Debusschere said. "It's being enlarged now, but I really don't mind that he's been sanctioned for it. It’s not only this incident, there’s many more incidents. If you ask around in the peloton about how their relation is with him, then 90 per cent will react negatively."

Hi @GianniMoscon if you ever throw a bike again to a friend... I will put you between your frame and it will take me exactly 6sec. to do it ! Kind regards 🙋‍♂️March 1, 2020