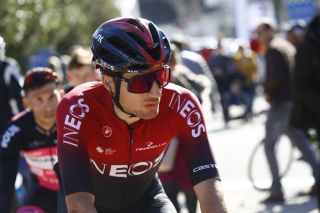 When Gianni Moscon arrived back at the Team Ineos bus after being disqualified from Kuurne-Brussel-Kuurne, he climbed straight onto the bus and stayed there.

With the Italian unwilling to discuss his latest indiscretion, it was down to the team’s lead director, Gabriel Rasch, to offer his take on the matter.

Following the conclusion of the race, Rasch had spent time with the jury, reviewing footage of Moscon, who’d been caught up in a crash, picking up a bike and throwing it at Jens Debuscherre.

"Basically, they wanted to show me the pictures on the big screen so I could see it. In the car you have small TVs and mobile phones and you can’t really see 100 per cent what happened," Rasch told Cyclingnews and The Cycling Podcast.

"I agree with the decision – it’s not something that should happen."

Asked whether there was any hint of trying to plead a case for the defence, Rasch was succinct: “No. It’s not acceptable, what happened.”

Moscon’s disqualification is the latest in a series of disciplinary issues, and leaves the team with a fresh headache over how to deal with the 25-year-old.

Moscon was also disqualified from the 2018 Tour de France for punching another rider, and from the 2017 World Championships for holding onto a team car. At the 2017 Tour de Romandie, he racially abused fellow rider Kevin Reza, and later that year he was accused of causing Sebastien Reichenbach – a teammate of Reza – to crash and break his hip and elbow.

Following the incident with Reza, Team Ineos suspended Moscon for six weeks - although this was at a time when he had few races scheduled - and sent him on diversity training. After the punch at  the Tour, he was suspended for five weeks by the UCI. In the Reichenbach case, meanwhile, he was cleared due to a lack of evidence.

"We have to speak to him now and it’s something we’re working on and have to continue working on, definitely," Rasch said.

"It’s more supporting him, really, and doing the right things so it doesn’t happen again, but you never have any guarantees."

Asked why these disciplinary issued keep occurring, Rasch said: "Difficult question. I don’t know. It’s just something that shouldn’t happen really, something we need to prevent from happening again."

As well as harming the reputation of himself and the team, Moscon’s actions also harmed the team’s chances in the race itself. Team Ineos were prominent in the late chase of solo attacker Kasper Asgreen, who beat the bunch by just three seconds. Had they had an extra pair of legs, Ben Swift might have been sprinting for something more than seventh place.

"I’m not sure what happened there, it was such a chaotic race. We were told over the radio that he was disqualified but for what, we didn’t know," Swift told Cyclingnews.

As for the way it weakened the team, his disappointment was evident: "It’s a shit situation. It is what it is, you can’t change anything."