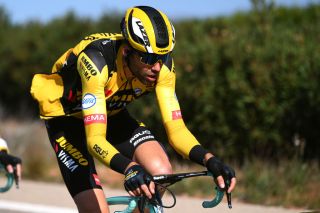 Jumbo-Visma's Maarten Wynants will retire after next season's Paris-Roubaix – his favourite race – and will then take up a new position with his team as a sports director.

The 38-year-old, who'll be approaching his 39th birthday when he retires, said that he had originally planned to stop after the 2019 season, but then decided to carry on in 2020 on the back of what had been such a successful season for his Dutch WorldTour team, with Steven Kruijswijk finishing third at the Tour de France and Primoz Roglic winning the Vuelta a España.

Now, Wynants has put retirement back even further due to this season having been interrupted by the coronavirus pandemic.

"I didn't want to stop like this," he told Het Nieuwsblad at the weekend, according to his team's website. "[I'll do] Paris-Roubaix two more times, and then it's time to get behind the wheel.

"Roubaix will be my last race. In principle, that could have already been possible in October because of the new calendar, but I would like to retire after a normal, full spring season.

Paris-Roubaix: The fastest, most consistent, unluckiest riders, and more

"Paris-Roubaix is my favourite race – one with a lot of emotions. The way in which Tom Boonen said good-bye after his last Roubaix may have subconsciously played a role, too," said Wynants, who rode with Boonen for four years on the QuickStep team. Boonen retired after the 2017 edition of Roubaix.

"I would very much like to lead Wout van Aert or a teammate to the victory on the [Roubaix] velodrome," Wynants said.

During a 17-year-long pro career, the Belgian has ridden for teams that include QuickStep and Chocolade Jacques, and, from 2011, Rabobank, who became Blanco, Belkin, LottoNL-Jumbo and are now Jumbo-Visma. Although he has yet to take his first pro victory, there's still time.

"My main role remains the same as always: team captain for the Classics. Luckily for me, they're not back until the end of the year. By then my body will definitely be back on track again," he said, referring to the break from racing due to the COVID-19 crisis and races such as the Tour of Flanders and Paris-Roubaix not taking place until late October.

"It seemed as though everything was going to be cancelled due to the coronavirus, but if we can still race for four months, that's something," said Wynants, who's ridden Roubaix 12 times and Flanders 13 times. "The season is not considered to be lost yet, and I'm still very eager to race.

"Our younger riders in the team for the spring races still need guidance," he continued. "They can all ride their bikes very hard, but you have to be able to make the right decisions at the right time. You have to learn and know when to go fast, and when you're better to save your energy. So it's good that an experienced rider like me can still guide them. Even after my retirement, I want to pass on that experience."

At first, Wynants will learn his trade at Jumbo-Visma's under-23 development, and then later move to the senior team.

"The idea is that I learn everything about being a coach with them before I move on to the WorldTour team. However, I will also do some smaller professional races, but the Tour de France is not immediately on my programme. I've been learning a lot about coaching for a while now. I have to take one more exam and then I'll have my coaching degree," he said.

"This coronavirus crisis has made me realise just how beautiful cycling is," added Wynants. "I'd been going full throttle for 17 years, so it was a pleasure to give my body a bit of a rest during these past few months.

"Now I'm able to go and give my best on the roads again, and I've proven that I'm still able to keep up with the other guys," he said.