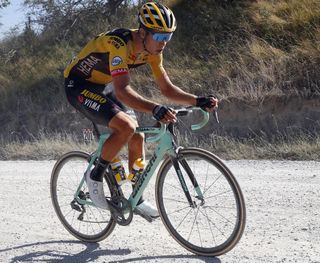 After winning Strade Bianche on Saturday, Wout van Aert asked his soigneur and mechanic not to wash his sweat and dirt-covered Jumbo-Visma jersey and his Bianchi bike, as he was keen to add them to a growing personal collection of cycling memorabilia.

"Over the years I've become a collector of special cycling jerseys. I think those souvenirs are much more beautiful than the trophies you get on the podium. I plan to make a private museum with everything later in life," Van Aert said, according to Het Nieuwsblad.

"I've kept the original jersey with the race number from all three of my world cyclo-cross titles, including the mud on them. The skinsuit I wore when I won the stage at last year's Tour is next to it."

Van Aert is now making extra room for his Strade Bianche memorabilia and wants to keep everything from his victorious ride on the dirt roads of Tuscany.

"I want to remember as many of those special victories as possible. The bike and the jersey are a must and I also want to keep the helmet, shoes and even the socks. I'd rather keep too much now than regret throwing them out," he explained.

"My Strade Bianche bike is definitely a unique item now. I went to see it again in the evening after the race and it was still completely covered with dust. It will stay that way; the team's mechanics will take care of that. Like the bikes on which I became cyclo-cross world champion, this bike will get a nice place on the wall."

Van Aert rode a classic celeste-coloured Bianchi Oltre XR4, opting to use caliper brakes while most of his rivals used disc brakes.

Riders often collect their most important jerseys but some also create personal museums of their bikes and trophies as a permanent memory of their career.

German sprinter Erik Zabel filled a second home with his memorabilia, as did Fabian Cancellara and Alberto Contador, while Bradley Wiggins has become a collector of historic jerseys and bikes used by some of the biggest names in the history of the sport.