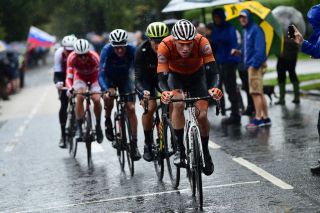 The Netherlands’ Mathieu van der Poel leads what would be the winning breakaway duding the elite men’s road race at the 2019 World Championships in Yorkshire, in the UK, but would later fade to finish more than 10 minutes down on winner Mads Pedersen of Denmark (Image credit: Getty Images Sport)

Mathieu van der Poel may yet ride the road race at this year's hilly World Championships, according to comments from the Netherlands' national selector Koos Moerenhout in the Belgian press. The Alpecin-Fenix leader has apparently been briefed about the route of this year's rescheduled and relocated course in Imola, Italy, and will seemingly be able to decide himself whether he takes part.

Imola – some 40 kilometres east of Bologna, in northern Italy's Emilia-Romagna region – was picked by cycling's governing body the UCI earlier this month as a replacement venue for the towns of Aigle and Martigny in Switzerland, which are unable to host this year's Worlds due to Swiss government limits on public gatherings during the ongoing coronavirus crisis.

It had been unlikely that Van der Poel would have featured in the Netherlands' squad had the championships remained in Switzerland, where instead Tom Dumoulin (Jumbo-Visma) and Bauke Mollema (Trek-Segafredo) would have surely been the team's leaders.

And while Dumoulin and Mollema are still likely to lead the selection in Italy – providing they come out of the Tour de France healthy and in form, and, according to Moerenhout, "no rider has cancelled in advance" – Van der Poel's inclusion for the Worlds would make for an incredibly strong Dutch squad, which Moerenhout apparently expects to unveil early next week.

"It's a course on which Mathieu can get far," Moerenhout told Belgian news agency Belga after returning from a reconnaissance trip to see the course, according to Het Nieuwsblad on Wednesday.

"I'm not saying the course is made for him – it's more difficult than last year," Moerenhout said, comparing it to the road race course in Yorkshire, in the UK, where Van der Poel faded to finish 43rd in the cold and wet conditions, more than 10 minutes down on winner Mads Pedersen of Denmark. "I've passed on my notes about it to Mathieu, and it's now up to him to interpret them.

"It also has to fit into his schedule, with his activities on the road, on the mountain bike and in cyclo-cross. In any case, Mathieu did not say no in advance," he added, with Van der Poel currently taking part in Tirreno-Adriatico in Italy.

Of the Worlds road race route around Imola, which finishes on the famous motor-racing circuit, Moerenhout said that it was "grueling" and "really difficult". The men’s race covers 260 kilometres and includes over 5,000 metres of climbing over nine laps of a 28.8km circuit.

"In addition, when you leave the circuit [before the finish], there's a stretch of four kilometres that's not steep but 'secretly' climbs," Moerenhout explained. "Even after the last climb, there are still a few uphill sections. It's a route on which the race could be decided anywhere."