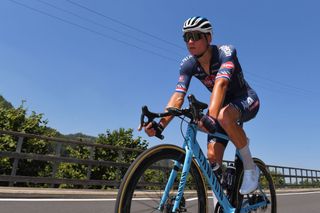 As Wout van Aert took his first Monument victory at Milan-San Remo on Saturday, it was a different story for his cyclo-cross rival Mathieu van der Poel. The Alpecin-Fenix team leader finished in 13th place on Via Roma, not making a move on the Poggio before he was blocked in at the finish.

After Van der Poel's showings last spring, including a phenomenal win at Amstel Gold Race, expectations were high as he made his Milan-San Remo bow at the weekend. But despite the seemingly disappointing end result, the 25-year-old was pleased with how his race went.

"I really enjoyed my first Milan-San Remo," he told WielerFlits. "It is, without a doubt, a great race. The goal was to be in front on the Poggio, and we succeeded. I think we as a team rode the perfect race up the Poggio."

Wout van Aert: I still don't know what my limits are

Van der Poel, who last week returned to racing with 15th and 13th places at Strade Bianche and Milano-Torino, said that the tactic was to wait for a sprint finish in San Remo.

In the end, the chase group he finished in was just two seconds down on Van Aert and runner-up Julian Alaphilippe, but catching the duo never really looked possible on the flat run-in to the line.

"The two best [Van Aert and Julian Alaphilippe] were at the front," he said. "I expected that everything would come together for the sprint as the gap at the top of the Poggio was small and there were still some big names in the chase group. I got a bit trapped in the sprint for third place.

"Although the result wasn't what we hoped for, the feeling is that things are improving. On Wednesday it's Gran Piemonte, and although I haven't yet looked at course extensively, I hope to play a role at the front."

Van der Poel's team manager at Alpecin-Fenix, Christoph Roodhoft, confirmed Van der Poel's tactical choices, but was disappointed in how things turned out for the team.

Speaking to Het Nieuwsblad, he said that the Dutchman's 'flash' in making decisive attacks for victory doesn't seem to be there just yet after six months away from racing.

"With two riders from Sunweb, UAE Team Emirates and Bahrain McLaren, he thought the cooperation in the chase group would be favourable and the two in front would be caught," Roodhoft said. "Unfortunately, that didn't happen. He gambled and lost. You can't always make the right choice.

"The result is not what we expected. We have to be very honest about that. The difference between winning and 13th is sometimes smaller than the results suggest. I don't want to say that he's not as good as we expected but the 'flash' that we're used to from him is not there yet, or he certainly hasn't used it yet.

"It's too early to draw conclusions now, but it's not pleasant. We expected more from these Italian races."

Van der Poel's season continues with Gran Piemonte and Il Lombardia this week, before he heads to Tirreno-Adriatico in September. The Ardennes Classics are also on the schedule for October, while his main goals will come later that month, at the Tour of Flanders and Paris-Roubaix.