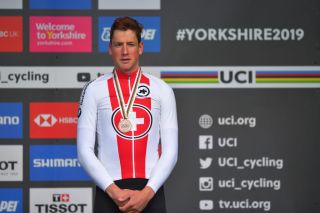 Stefan Küng has ended Switzerland's 20-year medal drought in the elite men's road race after securing bronze at the UCI Road World Championships in Yorkshire on Sunday. Küng told the press that his two breakaway companions - new world champion Mads Pedersen (Denmark) and silver medallist Matteo Trentin (Italy) - were stronger in the sprint and that he had no regrets about losing the world title.

"I have no regrets," Küng said. "I rode with my heart. I gave it all. Two other guys beat me."

Organisers had altered and shortened the elite men's 261km road race due to adverse weather and flooding in the area. Küng helped initiate the winning breakaway with American Lawson Craddock, late in the race on the fifth to last lap of the finish circuits in Harrogate. Pedersen bridged across, and they were joined by Gianni Moscon (Italy), and, after Craddock was dropped, by Trentin and Mathieu van der Poel (Netherlands).

"In the end, I looked at the circuit and the weather, and we knew we needed to be one step ahead of the others," Küng said. "It was my job to cover the moves. I know with the last races I did, and in the condition I was, this was the way I had to ride the race. Lawson is a really strong rider, and I followed him, we saw when Matteo and Mathieu came, they were really strong, but after one lap everyone was tired."

Küng, Moscon and Trentin, and Van der Poel continued to push the limits of the breakaway on a demanding 14km finishing circuit in Harrogate.

"With me being out there for 65km, I missed the punchy stuff," Küng said. "When you're out there for that long, you go into cruise mode, but it's hard to accelerate. I gave it all on the last climb, I tried to drop them, but they were strong enough to stay with me."

Van der Poel was dropped on the last lap and Moscon, who had been driving the breakaway for Trentin, lost contact on the final climb. Küng launched his attack first in a bid for the world title at the bottom of the uphill drag to the finish line.

His efforts were no match for the faster Trentin and Pedersen, and both caught and passed him. The pair sprinted for the line with Pedersen securing the world title and Trentin the silver. Küng settled for bronze.

Küng said he gave it his best effort and so wasn't disappointed to lose out on the rainbow jersey.

"I had a goal, I was focussed, and I prepared very hard," said Küng, who was 10th in the elite men's time trial earlier in the week. "I went to altitude camp to be ready for the World Championships. There are two races. I thought I had a bigger chance to get a medal in the time trial. My teammates said, when you're in shape, you're in shape, and it doesn't go away in a few days.

"I was keeping that in mind. I won two races before coming here, and I won one from far out. I think it's my style of racing. I have to go from further out because once I'm out there, I can hang on. In the end, tactics today were good. I don't think I would do anything different."