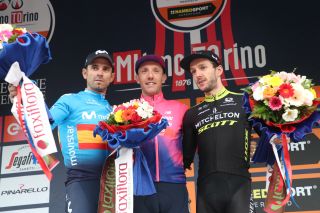 Michael Woods' aggression on the climb to Superga and his impressive victory at Milano-Torino in the shadows of the famous sanctuary that overlooks Turin confirmed he is a favourite for Saturday's Il Lombardia.

Woods will mark his 33rd birthday on Saturday and is ready to celebrate by riding 243km under the falling leaves of Italian autumn and over the tough climbs of Lombardia north of Milan. Victory in Como would be the ultimate gift and the perfect way to end the 2019 season.

"I wanted to have a big win this season, and Milano-Torino stands as a big win when you look at the field, but a win at Lombardia would be icing on the cake," he said after celebrating on the podium with Alejandro Valverde (Movistar) and Adam Yates (Mitchelton-Scott)

"I feel after this result that I have to be considered one of the favourites for Lombardia. However, I've never had a big result there or even finished in the top 10, so my goal is to get on the podium first. Then the next goal is to win it."

After victories at the Giro dell'Emilia last Saturday and then at the Tre Valli Varesine on Tuesday, Primoz Roglic (Jumbo-Visma) stands out as the rider on a roll. Both Valverde and Woods named the Vuelta a España winner as the rider to beat at Il Lombardia.

"I saw a great video of him dropping me at the Giro dell'Emilia. It was titled 'Robocop' and he made it look like he's a robot. He was effortless and it was quite discouraging looking at his face and seeing no expression of pain," Woods said, without showing signs of resignation.

"He's going to be a tough guy to beat, especially with such a strong team, but I'll give it my best effort."

Woods had been tempted to miss Milano-Torino with Il Lombardia so close. But he decided to honour the 100th edition of the Italian race, knowing the flat ride across the plains of Piemonte would be a steady ride in the peloton, with only the final 30km raced full on. It was a final, morale-boosting test before Saturday.

"I questioned about riding Milano-Torino with it being close to Lombardia, but at same time the finish up to Superga suits me so well, that it was hard to pass. I knew I was on really good day and this climb really favours riders who attack who go on the offensive," he explained.

Woods attacked early on the climb, keen to take on the race and his rivals. David Gaudu (Groupama-FDJ) was equally aggressive and almost as strong, making seven different surges during the final three kilometres of the climb. Woods responded to them all and made some of his own.

Valverde and Egan Bernal (Team Ineos) dragged the select chase group back up Woods and Gaudu several times, but Woods simply went deeper and faster, riding Valverde off his wheel with 400 metres remaining to take the first one-day victory of his career.

"If you go on the offensive you put everyone else under pressure, and that was my goal, to be on the front foot all the time," Woods said. "I think it worked out well…"