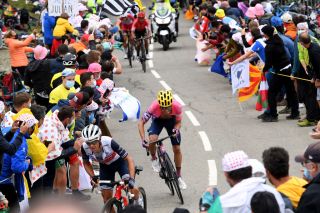 Urán in the Pyrenees on stage 9 (Image credit: Getty Images)

With Rigoberto Urán seemingly back to his best form and in contention for a possible top-five in this year's Tour de France, the American EF Pro Cycling squad enter the second half of the race with a significant degree of optimism.

They were in the lead of the teams' classification for several days and have also seen Neilson Powless take two top-five stage results after being in two decisive breaks.

With the majority of the mountains still to come, senior directuer sportif Charly Wegelius was in a buoyant mood ahead of Thursday's potentially key stage that ventures into the Massif Central.

"It’s been a great race so far," the former Italian-based pro rider said.

"Obviously the time gaps are very close. Some GC favourites have been eliminated but those in the top-10 are fully in the race."

Vaughters: Urán is the godfather in our Tour de France team

Sergio Higuita blog: I used to picture myself in the Tour de France – now the dream has come true

Seven riders sit within 44 seconds of Primoz Roglic’s yellow jersey, with Egan Bernal (Ineos Grenadiers) and Tadej Pogacar (UAE Team Emirates) seen as Jumbo-Visma's prime rivals. However, Wegelius believes that the delicate balance on GC hasn’t yet shone a light on how the next two weeks will pan out.

"I think that Jumbo-Visma deserve to have the lead they have. But the big decisions are still going to be made later in the race, about who is going to win, and there are still a lot of unanswered questions," he said.

"There’ still a lot to look forward to. With these short time gaps, even those that are currently with an advantage, they can’t sit on their hands and wait. It’s on everyone to race and take every chance that they have and to try and put as much distance between themselves and their rivals."

Urán, who finished second in the Tour de France behind Chris Froome in 2017, appears to be back to his best and the 33-year-old was within touching distance of the top GC riders in the Pyrenees. He also came through the first week of racing relatively unscathed, with no major crashes on incidents.

Urán was on the right side of the split on stage 7 into Lavaur when a combination of Bora-Hansgrohe’s efforts and crosswinds split the peloton into several echelons, and the Colombian typically manages to hold his form the deeper he goes into a three-week race.

"Obviously Rigo is in a great position. He’s got the condition but also the experience to handle these things," said Wegelius.

Urán’s teammates, Sergio Higuita and Daniel Martínez, both came into the Tour as possible GC contenders but both riders have slipped back as the race as developed.

Martínez took a heavy fall on stage 2 and, despite a valiant late chase, was dropped before the finish. Higuita is making his Tour debut and is learning as the race goes on, but his climbing legs have still kept him inside the top-20 on GC.

"Dani of course was less fortunate than Rigoberto but that could be a blessing in disguise as he may have room to move from long-range attacks later in the race," Wegelius said.

"Sergio is in a similar position to Dani. It’s his first time at the Tour, so he’s growing and learning from Rigo and I’m sure that he’ll have chances later in the race as well."