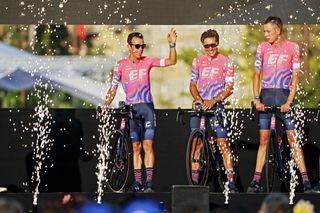 If EF Pro Cycling can copy their Critérium du Dauphiné tactics at the Tour de France over the next few weeks then Jonathan Vaughters will reach Paris a happy man.

The American squad came away with the overall win in the Tour de France warm-up race earlier in August, and although replicating that result would be a monumental ask, the idea of at least replicating their Dauphiné approach at the Tour could reward them with success over the coming weeks.

The US WorldTour team arrives in Nice with former Tour de France runner-up Rigoberto Urán within their ranks, while the 33-year-old is joined by the exciting prospect Sergio Higuita and Dauphiné winner Dani Martínez.

According to Vaughters, the trio will start the Tour on equal footing, although their possible game plan may revolve around a patient approach, rather than an aggressive all-out assault.

“My hope is that we see the same thing as we saw in the Dauphiné, where Jumbo and Ineos beat the living crap out of each other and then we’re able to spring up in a moment where they’ve beaten each other down to a pulp and we can sneak away,” Vaughters told Cyclingnews on Friday.

“All three - Rigo, Dani and Sergio - are going in on equal terms. We’ll play it out from there," Vaughters explained.

"Rigo is like the boss, he’s like our road captain, and he’s like the godfather of the team. Those guys will listen to what Rigo thinks we should do, but as far as who we’ll support, it’s the three of them. We’ll see what they can accomplish once we get to the mountains, which is actually a lot earlier this year.

"It’s not like in previous years when you spent 10 days supporting a guy and then on the 11th day he crashed. We’ll know who is here to play, and who’s not fairly early. You play the big game first, with trying to get someone onto the podium but then if something goes a bit off then the stage wins or the teams’ classification are achievable."

The rest of the EF Pro Cycling team for the Tour is made up of solid all-rounders who can add support on the flat stages and hang around for most of the Tour de France climbs, which include 29 categorised passes and five mountain finishes.

One talking point that stemmed from the team’s roster announcement was that Michael Woods hadn’t made the cut.

Some speculated that it was down to the fact that the Canadian was leaving the team at the end of the year but Vaughters put the decision squarely at the feet of Wood’s horrific crash earlier in the spring that left him with a broken femur.

“It had nothing to do with him going to a different team. The decision was made a long time before he was going to another team, otherwise he would have been on our Dauphiné team," Vaughters explained.

"We just didn’t feel that a rider who broken his femur in mid-March should do the first Grand Tour in this crazy season. Instead he’ll do a lighter programme with Tirreno-Adriatico and then build into races later on. The Tour is nervous and we just didn’t feel comfortable putting in a rider who has such a severe injury and throwing them into the most dangerous race of the year."

One rider who did make the cut was Tejay van Garderen. He had a relatively quiet showing at the Critérium du Dauphiné but Vaughters backed the American to come good at the Tour.

“He’s come up a lot since the Dauphiné. You have to remember that we’re the only team that did no races until the Dauphiné with a number of our Tour team. We came in cold. And we won the race, by the way," Vaughters said about van Garderen, now on his second year with the team.

"But Tejay in this race is a high-powered helper and he likes that role. Some people think of him as this super-nervous rider from five years ago, and that you could almost feel the pressure on top of this great hope of American cycling, but he’s just a normal guy and has a big motor. He’s a great guy and has blended in really well with the group.”