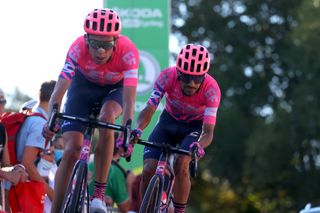 It was a disappointing race for Daniel Martínez (EF Pro Cycling) who crashed twice and lost more than three and a half minutes on the second stage of the Tour de France. The Colombian, who went into the race as co-leader alongside Rigoberto Urán and Sergio Higuita, confirmed that he has knee pain but no other serious injuries and will start stage 3 in Nice on Thursday.

“I’m feeling really disappointed after today, I fell twice, once at the beginning of the Col de Turini and the other time on the descent closer towards the finish line," Martínez said.

"The first fall hurt more because it felt a bit harder even though the second one I was going faster, but I just slid out. But the doctor has said that everything is OK, I have a bit of pain in the knee, it’s a little bit swollen, but it’s normal, I’m just hoping that it recovers quickly over the next few days.”

The team were hoping to put the crash-marred opening stage, that saw Urán go down inside 3km to go, behind them, and looked forward to stage 2’s 186km that started and finished in Nice.

Martínez started the day 10 seconds down on stage 1 winner Alexander Kristoff (UAE Team Emirates), however, given that the stage included four climbs; Col de la Colmiane, Col de Turini, Col d’Eze and Col des Quatre Chemins, it was always meant to be an opening test for the overall contenders.

It was a special stage for Martínez, too, because he won on the summit of the Col de Turini during the queen stage of Paris-Nice last year.

Unfortunately, it was at the start of the Col de Turini, mid-stage, where Martínez first crashed during stage 2. He was able to get back into the main field only to crash again on the descent off of the Col d’Eze.

Closer to the bottom of the descent, Hugh Carthy stopped to wait for Martínez and helped bring him back into the main field, reconnecting with roughly 15km to go, and just ahead of the final climb over the Col des Quatre Chemins. However, Martínez wasn’t able to respond when Julian Alaphilippe (Deceuninck-QuickStep) launched his searing attack over the last climb, and he ended up finishing 3:38 behind the stage winner.

"Unfortunately Dani Martínez fell down twice and the chase cost him quite a bit of energy," said EF Pro Cycling director Charly Wegelius. "Nonetheless, the team did a very good job and Hugh Carthy did an extremely good job of bringing Dani back. Sergio got top five, which is a nice way to start off the tour in such a tough stage.”

Martínez was one of the favourites for the overall classification heading into the Tour de France after winning the Critérium du Duaphiné earlier this month. At that race, Martínez went into the final stage positioned in the top-five overall behind Thibaut Pinot (Groupama-FDJ), who took the virtual lead when Primož Roglič withdrew from the race due to injuries sustained in a crash the previous day. A strong performance from Martínez on the final climb up to the Altiport saw him place second on the stage and take the biggest overall victory of his career.

Martínez competed in the Tour de France in 2018 where he finished 36th and although he was slatted to compete in the race last year, he was sidelined following a training crash last June.

This year, he joined a strong line-up at EF Pro Cycling for the Tour de France as one of three leaders with Uran and Higuita, who are both currently 17 seconds down in the classification, with support from Carthy, Neilson Powless, Tejay van Garderen, Alberto Bettiol, and Jens Keukeleire.