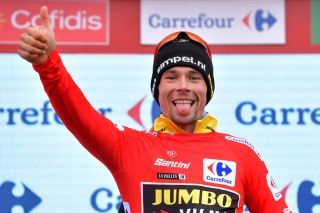 Primoz Roglic hams it up for the cameras after stage 16 at the Vuelta (Image credit: Getty Images Sport)

Divide and conquer. First at los Machucos, then at Acebo and now at La Cubilla. For the third stage running in the Vuelta a Espana mountains, Primoz Roglic (Jumbo-Visma) rode defensively but with the best of his GC rivals, strengthening his lead in the process.

In Los Machucos, Roglic and Tadej Pogacar (UAE Team Emirates) distanced Miguel Angel Lopez (Astana) and Movistar duo Alejandro Valverde and Nairo Quintana, then on the Acebo, it was Roglic and Valverde who moved ahead.

On La Cubilla, the last summit finish before the Vuelta's second rest day, Roglic, Lopez and Pogacar managed to drop Valverde, albeit by a small margin of 21 seconds. Each time a different rival or rivals, then, but each time Roglic made a gain whilst saving energy.

Roglic explained that when Lopez attacked and Pogacar went with him, despite briefly lagging behind, he was once again playing a long game with Valverde, second overall, the main objective.

"It was a hard day with a long last climb," he said. "Of course Miguel Angel Lopez's attack was really strong, but I was watching Valverde and then when I saw Valverde was in trouble, I bridged across."

The power with which Roglic managed to close the gap on his two younger, less dangerous rivals was impressive, and certainly bodes well for the Slovenian in the Vuelta's third and final week.

Asked if he feared he could have difficulties in the third week, Roglic said simply, "No."

"So far it's going really well and I remember last year in the Tour I was doing ok in the third week. So I'm looking forward to that here."

Traditionally taciturn in his press conferences and limiting the number of questions once again to three, Roglic was asked by one Spanish journalist why he seemed so serious and if he wasn't pleased to be at the Vuelta a España, en route to his first ever Grand Tour win.

"I am very happy," Roglic answered, "I'm always probably a little tired when speaking with you guys after the stage.

"I'm  really enjoying the race going really good, but still first I have to enjoy the rest day and then stay focussed on doing well in the third week."

Jumbo-Visma certainly stayed on track and were present in numbers in the last mountain stage in northern Spain, with five of the team's riders holding down a steady pace on the front of the bunch throughout for their leader Roglic, then maintaining the high rhythm on the lower half of the climb to La Cubilla.

It was only when Lopez attacked that the team support evaporated, but by then Roglic was able to handle the rest of the climb by himself.

Roglic was also asked by the Vuelta's own website if he considered that Jumbo-Visma could be the new Team Ineos, given the way they were racing  – and winning – in Spain.

"Hopefully we can be like them with our wins since they've won so many stage races," Roglic answered.

Should Roglic go the distance to Madrid, of course, he will be winning his first Grand Tour in the Vuelta a España, just like a certain Chris Froome. But  there are still five days to go and even if the Slovenian and his team remain firmly in control of the race, attacks by riders like Lopez show they will be tested every inch of the way.