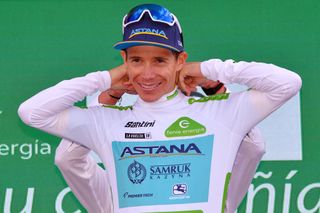 Being caught and passed in a time trial usually has the feel of a knock-out blow for a Grand Tour contender. It certainly did for Raymond Poulidor on the 1962 Tour de France, when Jacques Anquetil bore down upon him in the Lyon time trial, and his directeur sportif Antonin Magne rolled down the window to alert him: "Raymond, watch and admire the Caravelle [a French-built jet – ed.] going past."

Unlike Poulidor, Miguel Angel Lopez (Astana) had not resigned himself to marvelling at the aerodynamism of Primoz Roglic (Jumbo-Visma) when he swooped past him in the final kilometre of stage 10 of the Vuelta a España in Pau on Tuesday.

The previous day, Lopez estimated that he would lose between 90 seconds and two minutes to Roglic, and his prediction proved to be an accurate one. Roglic, who set out two minutes behind Lopez, caught him in the dying metres of the stage and the pair crossed the line more or less together.

Rather than viewing being caught by Roglic as a humiliation, Lopez looked to place his performance in a wider context. He limited his losses on Alejandro Valverde (Movistar) to 22 seconds, while he fared altogether better than his fellow countryman Nairo Quintana (Movistar), who conceded a mammoth 3:06 to the new maillot rojo Roglic.

"Of course, I'd like to have lost less, as two minutes are still two minutes," Lopez said afterwards. "But, in general, I think, I had a good day on the bike. I lost to Roglic and Valverdebut gained time on Quintana. So, the time trial is done, and we have almost full two weeks ahead with many hard mountain stages."

Lopez's thoughts were echoed by his Astana teammate Dario Cataldo in Saint Palais before the start of stage 11 on Wednesday. The Vuelta's previously tight margins loosened considerably but the 36.2km test around Pau was also the final time trial of the entire race. From here to Madrid, the maillot rojo will be contested primarily in the friendlier confines of the high mountains.

"Two minutes are always a lot," Cataldo told Cyclingnews, "but that's still more or less in line with what we expected. We knew that this was going to be the most difficult moment of the Vuelta for Miguel Angel, but we also know that from here on the terrain should favour us more.

"There's still half the Vuelta to go, and a lot of mountains, so it's all still to do. It certainly won't be easy, but before the Vuelta started, we could have imagined ourselves being in this position at this point in the race."

Lopez lies third overall, 2:11 down on Roglic and 19 seconds behind Valverde, while Quintana is in fourth place, exactly three minutes off the maillot rojo. If Roglic's current position of strength on the Vuelta roughly mimics his status at the corresponding point of the Giro d'Italia, Lopez's challenge is in a considerably healthier state than it was at the same juncture in May.

After a calamitous time trial in San Marino on stage 9 of the Giro, Lopez found himself 4:29 behind Roglic. With another individual test to come on the final day in Verona, Lopez was forced onto the offensive early and often for the remainder of the Giro, but he ultimately had to settle for 7th overall in Verona. At this Vuelta, he can, at least in theory, take a more conservative approach to making up his deficit.

"A two-minute gap is more manageable than the deficit he had at the Giro, and he can try to chip away at that by attacking on the final climb rather than risking things from distance," said Cataldo. "There are still a lot of summit finishes to come. We know what the situation is, and we know our strengths – we just need to make as few errors as possible."

Lopez has already worn the maillot rojo on three occasions on this Vuelta, including after the first summit finish at Javalambre, where he gained a dozen seconds on Roglic. In Andorra on stage 9, meanwhile, the Colombian's attack on the Alto de la Comella saw him gain half a minute on Roglic et al, thanks in no small part to help from his Astana teammates in the day's early break. That work came undone when Lopez crashed on the gravel section that preceded the final climb, but the offensive demonstrated the quality of his supporting cast, with Jakob Fuglsang and Gorka Izagirre to the fore.

"The crash was a bit of bad luck, unfortunately, but we were still happy afterwards because he did a great ride and we did our work well. We know that if we can do something like that there, then we can repeat it again further ahead in the race," said Cataldo, who acknowledged that Roglic can rely on a formidable praetorian guard at Jumbo-Visma.

"They're really very strong, and they've already shown that in the mountains, where they've had a few different riders up there. But we've got a strong team ourselves, so it will be a nice battle."