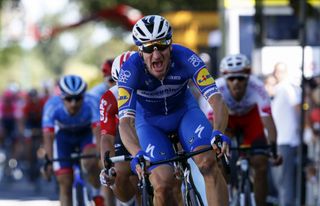 Elia Viviani will be back in the saddle on Friday as he begins to prepare for his 2020 campaign with new WorldTour team Cofidis, where he'll combine sprinting on the road with preparation for the track at the Tokyo Olympics.

The Italian sprinter has left Deceuninck-QuickStep for a leadership role at Cofidis as the French team steps up from Professional Continental level to the WorldTour. He will wear the distinctive European champion's jersey on the road and the Italian Azzurra jersey on the track as he targets the team pursuit, Omnium and Madison.

"My new bike arrives on Friday and it marks the start of a new chapter. After three weeks on holiday, I'm keen to start all over again," Viviani told La Gazzetta dello Sport.

Viviani back on track and planning for the Tokyo Olympics

The Italian sports newspaper revealed that Cofidis will use De Rosa bikes equipped with Campagnolo components, Fulcrum wheels and Vision handlebars. At Deceuninck-QuickStep, Viviani rode a Specialized equipped with Shimano.

"The first week will all be about getting used to the new bike. Like every year, it'll feel like I've never ridden a bike in my life but, after a few days of painful legs, I know things will get better.

"I've had three weeks' holiday, I'm up to 75kg, when my best racing weight for the Classics is about 70kg, but it's not a problem. When I start training again, I start eating like a rider again."

Viviani moved to Monaco last year and is hoping to enjoy the mild winter on the Côte d'Azur.

"I'll start with volume rather than intensity and specific work, doing rides that leave you tired on the sofa. The hilly roads around Monaco help because you always clock up at least 2500m of climbing each time," he explained.

"I'll start with two days of training and one rest day before switching to the classic three-one later on."

In 2018 he won 18 times, taking four stages at the Giro d'Italia and three at the Vuelta a España. He will no longer have the support of the Belgian super team but Cofidis hope he can repeat at least part of his sprinting success.

"They wanted a leader that was high up in the UCI rankings, a successful sprinter who can also do well in the Classics," Viviani explained.

"I don’t have [Michael] Mørkøv for the sprints and so Sabatini will be back as my last man with Consonni in front of him. Laporte could offer some key support, especially on my first major goal of Milan-San Remo."

Viviani will make his racing debut with Cofidis at the Tour Down Under in Australia in January. Riding the Tour de France and then switching to the track for the Tokyo Olympics will be a real test of his talents and adaptability but Viviani is confident it an be done.