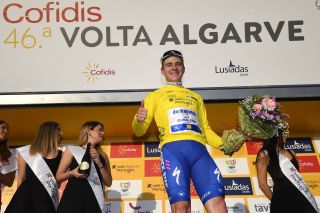 Belgian national coach Rik Verbrugghe has backed Remco Evenepoel (Deceuninck-QuickStep) to shine over three weeks in the 2020 Giro d’Italia, assuming the postponed race goes ahead as scheduled in October.

Evenepoel was due to make his Grand Tour debut at the Giro this month, but the race was postponed until the Autumn due to the coronavirus pandemic. The 20-year-old was initially slated to target the opening time trial and then use the race partly as preparation for the Olympic Games in Tokyo.

Verbrugghe suggested that Evenepoel had not planned to complete the 2020 Giro, but he wondered if his objectives have been revised upwards following the rearrangement of the calendar.

“The idea at the start was that he’d do two weeks on the Giro d’Italia,” Verbrugghe told RTBF. “What is it now? Will the original plan be respected? Is an abandon still planned? We can sense that riders have the motivation, they have a lot of energy. They want to ride as much as possible.

“With the lockdown, they’ve barely raced this season. All they’ve done is train. Maybe Remco might want to test himself over three weeks rather than two. I think that he has the qualities to shine over three weeks.”

Verbrugghe wore the maglia rosa on his Giro debut when he won the prologue in Pescara in 2001. Evenepoel was aiming to emulate his national coach in the opening time trial in Budapest, but with the Hungarian start ruled out, the Giro will instead begin in southern Italy, with a precise location still to be announced.

“It’s absolutely possible. The prologue should suit him,” Verbrugghe said of Evenepoel’s prospects of marking his Giro debut with a spell in the pink jersey.

The redrawing of the calendar means that the Giro will clash with Liège-Bastogne-Liège, which had also been among Evenepoel’s targets for the 2020 campaign. Verbrugghe maintains that the Belgian is right to skip La Doyenne this year in favour of making his Grand Tour debut.

“I completely understand the reasoning behind it. That’s going to give him many more days of racing and he’s going to be able to draw more lessons from it,” Verbrugghe said.