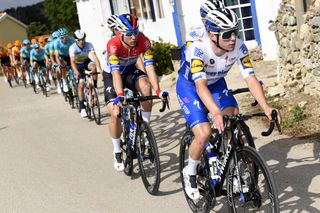 Remco Evenepoel (Deceuninck-QuickStep) will focus on the World Championships and the Giro d’Italia if the cycling season is able to resume from its current hiatus in the Autumn.

In an interview with La Dernière Heure, the Belgian ruled out riding the postponed Tour de France and said that he would give priority to the Giro over Liège-Bastogne-Liège in the event of a clash, though he is favourable to the idea of reducing the postponed Grand Tours to two weeks in a compressed 2020 calendar.

Competition has been suspended since March due to the coronavirus pandemic and although it remains unclear as to whether the season will be able to resume, the UCI is drawing up a revised calendar for the Autumn.

The Tour has been rescheduled for August 29-September 20, while the Giro is slated for October and the Vuelta a España for November. The World Championships in Martigny remain in their original slot on the calendar from September 20-27. Evenepoel took silver in the elite time trial at the 2019 Worlds in Yorkshire in his first season out of the junior ranks.

“If the Worlds programme stays unchanged, then the time trial will take place on the final weekend of La Grande Boucle, and the rainbow jersey is clearly a major objective,” Evenepoel told La Dernière Heure when asked if he had considered riding the Tour in 2020.

“I also believe that the Giro, in its revised version, will start with a time trial, which could give me some interesting possibilities…”

The 20-year-old began the season with overall victories at the Vuelta a San Juan and the Volta ao Algarve, and he had been scheduled to target the Ardennes Classics in April and make his Giro debut in May before building towards the time trial at the Tokyo 2020 Olympics. The World Championships and Il Lombardia were due to be the focus of the final part of his year.

“When I found out that the Olympics had been postponed until 2021, that was obviously hard to take. But after a few days, I realised that it would give me another year to continue my progression and get a bit more experience,” Evenepoel said.

“Since the start of November, I had been totally absorbed by the prospect of Tokyo, everything was built around the Olympics. I also should have raced my first Grand Tour and my first Monument [Liège-Bastogne-Liège] this spring, so it’s quite logical that it hurt me a bit to see these challenges disappear. But we should ride a Giro this year all the same, in October.”

The UCI’s revised calendar has yet to be confirmed, but RTBF has suggested that three of the Monuments are scheduled to take place during the Giro, including Liège-Bastogne-Liège. La Doyenne has reportedly been pencilled in for October 4, while the Giro could take place from October 2-25 – providing competition resumes at all in 2020 due to the COVID-19 pandemic.

“The priority would logically go to the Giro d’Italia,” Evenepoel said of the hypothetical calendar clash. “We’ve already talked about it inside the team and I’ve discussed with several teammates: when the opportunity to ride a Grand Tour presents itself, you need to take it. I’d have to cross out La Doyenne.

“We only have, in theory, four or five months in the second part of the season to fit in the maximum number of races. I think it could be interesting to hold the Grand Tours over two weeks rather than three. That would leave more space for other events. Without that, the calendar is going to impose some terrible choices. If the Giro and Liège-Bastogne-Liège take place at the same time, that will prevent certain riders from taking part in two events they like. That would be a pity.”