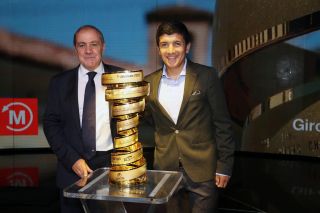 Giro d'Italia race director Mauro Vegni was happy to hear Peter Sagan confirm that he will ride the 2020 Corsa Rosa but the experienced Italian race organiser knows he faces an uphill battle to attract the likes of Tour de France winners Egan Bernal and Geraint Thomas.

While the Tour knows it does not need to offer start fees to secure the presence of big-name riders, Vegni is not afraid to strike financial deals with teams to persuade them to send specific riders. In recent years he has secured the presence of Chris Froome and Tom Dumoulin at the Giro, boosting the global profile of the race.

The Grande Partenza in Hungary will perhaps boost Vegni's race budget for 2020 but after the route presentation in Milan, he claimed he not yet opened any negotiations with Team Ineos or other major teams.

2019 Giro d'Italia winner Richard Carapaz hinted he will back in 2020 after his move to Team Ineos and Vegni hopes that the strength of the British team’s Grand Tour roster could see Thomas or even Bernal line up in Budapest on May 9.  Team Ineos are expected to decide their roster for the 2020 Grand Tours in November after analysing the routes.

"They have four riders who have won Grand Tours on their 2020 roster, so they will have to choose their leaders carefully," Vegni told Cyclingnews and other media after the route presentation in Milan on Thursday evening.

"I think things are still wide open and are still to be decided. I haven’t spoken to the team but I think if Froome is back to his best, then it’s logical he targets a fifth Tour de France victory. If that happens then I don’t know if Bernal could be the right rider to help him… There could be other options. I think Ineos' decision will depend on the health and form of their riders. That will decide who rides the Giro and who the Tour. If it's Carapaz, Froome, Bernal or Thomas, there'll be an important presence from the team at the Giro."

There was a distinct absence of Italian riders and teams at the Giro presentation on Thursday, and Vegni knows that a place in the 2020 race is vital for the survival of the Androni Giocattoli, Bardiani-CSF and Neri Sottoli-Selle Italia teams. However, the recent UCI reforms will reduce the number of wild card teams Vegni can invite to the Giro. If, as expected, Cofidis secures a place in the 19-team WorldTour category, Vegni will only have two wild cards to play with.

"I don’t like that at all," Vegni said of the new UCI rules. "It doesn't help Italian cycling, which has given so much to the sport, because it could force me to leave out one Italian team.

“As they face a tough future, I'll do what I can to help them and so I hope to be able to invite all 3 Italian teams. How? Well, maybe the French team [Total-Direct Energie – ed.] will focus on doing the Tour de France, so I can invite the three Italian teams and so help them survive."