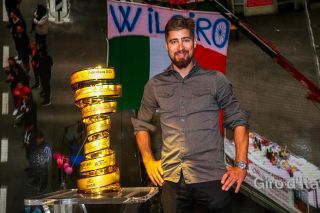 Peter Sagan has announced he will race the 2020 Giro d'Italia. The three-time world champion traditionally heads to the Tour of California after his spring Classics campaign but next year he will instead race the Corsa Rosa for the first time in his career.

Sagan's team Bora-Hansgrohe also confirmed that he will race the 2020 Tour de France in July.

The news was announced during the route presentation of the full 2020 Giro d'Italia in Milan on Thursday.

"Italy holds a special place in my heart. It is the country where I won my first World Championship in 2008 and where I spent the formative years of my professional career, riding for an Italian team," Sagan said in a press statement.

"In the last ten years I have had the opportunity and privilege to compete, many times, in some of the most prestigious races held in Italy, but I always felt that something was missing, the Giro d'Italia.

"I don't think there is any rider that doesn't dream of taking part in the Corsa Rosa, one of the most beautiful and challenging races in the world. This is why I'm delighted to announce that on May 9th, I will be on the starting line in Budapest, ready to tackle this iconic Grand Tour for the first time.

"It will certainly not be an easy race but I look forward to it. With the Grande Partenza and the first three stages held in Hungary, next year's Giro d'Italia will also give me the chance to race so close to Slovakia and I'm sure the cheers of the Slovak crowds will be felt along the course.”

The 2020 Giro d'Italia will begin in the Hungarian capital of Budapest, 50km from the border with Sagan's native Slovakia and only a few hours from his birthplace in Zilina.

The 2020 Giro d'Italia starts with an 8.6km individual time trial with an uphill finish in central Budapest. It is followed by two flat stages that are expected to end in sprints. Sagan's short time trial and sprinting skills give him a chance of a stage victory and perhaps even a spell in the race leader's pink jersey.

The first half of the 2020 Giro d'Italia route also includes several hilly finishes that would hurt the pure sprinters but perhaps give Sagan further opportunities of victory.

2020 Giro d'Italia route: All the rumours ahead of the big reveal

The announcement of Sagan's presence next May came on the back of an article in Sunday's La Gazzetta dello Sport - the newspaper owned by the Giro d'Italia's parent company - heavily linking Sagan to a place on the start line. Sagan also wrote a post via social media that he would announce "something important'" on Thursday.

Sagan recently told La Gazzetta dello Sport that Italy felt like "home". He used to live in the north east of the country, speaks the language, and used to race for the Liquigas team.

La Gazzetta dello Sport hinted a Sagan appearance at the Giro would happen "sooner rather than later" and with Bora-Hansgrohe team manager Ralph Denk replying "Why not?"

Sagan has never raced the Giro d'Italia during his ten-year career, preferring to focus on the spring Classics and the Tour of California before taking a break ahead of building up to the Tour de France.

If he wasn't to sacrifice either of those ambitions, it's likely any appearance at the Giro d'Italia would be short-lived, and that he'd head home without completing all 21 stages to recover for the Tour de France.

In a press release ahead of the Giro d'Italia route presentation, Denk confirmed that Sagan would in fact be competing in the both the Italian Grand Tour in May and the Tour de France in July.

"I have always said that Peter’s race program would change in the future," Denk said. "For next year’s season he’ll have the Giro in his program, where he’ll be involved in the fight for the points classification.

"A champion like Peter should, in my opinion, be at the Giro at least once in his career. For me, it also shows respect towards the Giro, a traditional event within our sport. I have not yet examined the route in detail, however, traditionally the Giro contains several stages that suit Peter.

"Having said this, the fans in France should not worry, as Peter will also be competing in the Tour de France in July.”