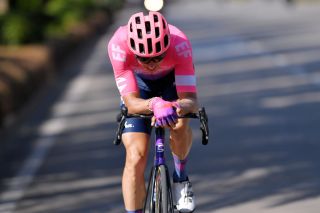 Sep Vanmarcke is looking ahead to next season at the Tour of Guangxi, keen to put an unlucky 2019 behind him, even if there were wins along the way.

Two days ago, in Nanning, the Belgian attacked from the break to help his EF Education First team win stage 2 of the race as Dan McLay sprinted to victory. Vanmarcke went solo in the final 10km, but a mechanical issue saw him caught while charging for victory.

The incident was something of a flashback to his biggest race of the year, Paris-Roubaix, where a derailleur problem in the finale saw him forced to change bikes and miss out on a chance to contest the win

Vanmarcke left inconsolable after taking another fourth place at Roubaix

"I had a really good level in the classics," Vanmarcke reflected before the start of stage 4. "I was fourth in Roubaix, but the big disappointment was that I crashed out in E3 Harelbeke [BinckBank Classic – Ed.], so I missed the opportunity to score there, at Gent-Wevelgem, the Tour of Flanders and even at Roubaix I wasn't in my best possible form.

"Like two days ago here I also had a mechanical in the last 5km, which stopped me from going for the win. So, I was disappointed about some things but overall, I had a really good level and got some nice wins out of it."

Vanmarcke's successes this year have almost bookmarked his season, with his first coming on the opening stage of the Tour du Haut Var in February, while September's Bretagne Classic-Ouest France saw him capture his first career WorldTour victory.

"I didn't win too often, just two races, one at Ouest France – a big race. I showed again that I have a high level, but I need some luck to get the nice wins."

Despite testing himself on stage 2 in Guangxi, the race isn't one that Vanmarcke has held much ambition for, instead saying that the six-day stage race is part of his plans to build on for next season.

"Basically, I do this race towards next year," he said. "Then I hope to have a good winter, and of course, the big goal is the classics once again. I know that I'm always ready, always good. Now I can only hope to stay on the bike, stay healthy, have some luck and then I should be in front."

His team have drafted in several notable reinforcements for 2020 too, showing belief that Vanmarcke can indeed banish the misfortune and succeed in April. Magnus Cort, a man who has scored top 20 placings at the E3 BinckBank Classic and the Tour of Flanders, joins from Astana, while Jens Keukeleire, who was 12th at Flanders this year and runner-up at Gent-Wevelgem in 2017, comes on board from Lotto Soudal.

Cobbled classics veteran Matti Breschel is leaving the team, but with the two newcomers plus Flanders champion Alberto Bettiol and Sebastian Langeveld, third at Roubaix in 2017, Vanmarcke has an outstanding amount of firepower to rely on next spring.

"Adding those two [Keukeleire and Cort] to the lineup with Bettiol, Langeveld and me makes it already five people that are basically riders who can race the final," said Vanmarcke. "We should have a strong team – I'm not saying we're all going to be in the final, but at least maybe three of us.

"It looks a good squad, and again Roubaix [is the goal]. From Harelbeke onwards we have to be really good until Roubaix, which is basically only two weeks. But in those two weeks you hope to have everything go well."

Vanmarcke is overdue a misfortune-free cobbled campaign, and with the strongest support team of his career backing him up next season, he has a lot to look forward to.