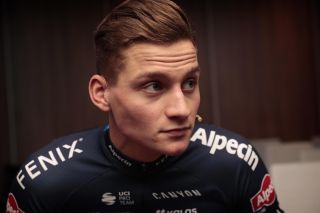 Mathieu van der Poel's season plans are up in the air after the Olympic Games were postponed because of the coronavirus pandemic. The Dutchman told Sporza today he would consider making a debut in the Tour de France if the race is held and the Alpecin-Fenix team could get invited.

"If the Tour is still ridden this year, then maybe we can lobby to get in there," Van der Poel said to Sporza.

"I think we would get an exceptional Tour de France, with a lot of other types of riders. I would certainly be open to that."

Alpecin-Fenix was not among the wildcards selected by Tour de France organisers ASO. In addition to the 19 WorldTour teams, Arkéa-Samsic, Total-Direct Energie and B&B Hotels-Vital Concept earn the nod for this year's race.

Van der Poel came into the season with his sights set firmly on the Classics before refocussing on preparing for the cross country mountain bike event in Tokyo, postponing his Grand Tour debut for next season. But with the Olympics now in 2021, the Grand Tours are on the table for this season - whatever that might look like.

"Now we have to adapt, because that Olympic dream is certainly not gone yet. Next year I would normally be mountain biking."

The Tour de France has not yet been cancelled: ASO is giving themselves until May 15 to set a date for the race. First, the pandemic must be tamped down enough for authorities to allow mass gatherings again.

Van der Poel was due to race the Tour of Flanders today but instead participated in a Zwift race indoors.

"And with such beautiful weather: 20 degrees and sunshine, that's what I prefer to race in. That actually hurts even more," he said.

The organisers of the Tour of Flanders said they still intend to hold the race this year if racing is allowed in the autumn, but Van der Poel isn't making any concrete plans yet.

"I'm waiting until it's definite and then we can rebuild," he said.