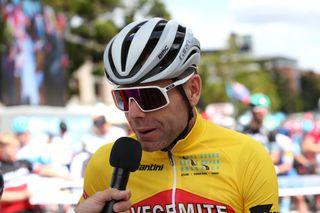 The 2011 Tour de France champion, Cadel Evans, says that young cycling stars Remco Evenepoel and Mathieu van der Poel could reinvent themselves as potential Grand Tour winners, if they're prepared to put in the effort required to change their body types.

Speaking in a Facebook Live session with Sporza.be from his home in Switzerland on Monday, the Australian also voiced his concerns about the future of some cycling teams on the back of the period of time without racing while the coronavirus pandemic continues.

"I saw one team manager saying in the press that if there's no Tour de France this year, we're going to see the demise of many teams," Evans said. "I hope that's not the case, but we are so dependent on the Tour de France, and on media and television, and that's what the sponsors are in for, so it's a very unfortunate situation, economically."

Merckx: Van der Poel can win everything, even the Tour de France

The Belgian website asked Evans' opinion on a number of current riders, but was especially keen to hear his thoughts on the prospects of the rider some are calling 'the new Eddy Merckx' – 20-year-old Deceuninck-QuickStep rider Remco Evenepoel.

"He's a really interesting rider, and if he continues to progress at half the speed he's progressing now, he's going to be good," Evans said of Evenepoel. "It's amazing these talents that are coming through now, and it's great to see these big, big talents are coming through from places like Belgium because there's been a little gap [between star riders]. Philippe [Gilbert, Lotto Soudal] is still racing, but it's good to see a huge talent coming through from Belgium."

On the subject of Evenepoel potentially being able to ride for overall victories at the Grand Tours in future, Evans said: "I think it depends a lot on your mind-set, and of course that's shaped by the people around you, but most of all it's about your passion, motivation, and goals. I think if a rider deep down wants to be a three-week rider, you have to commit to three or four years of forming your body, and doing the right races – and by doing the right races you're gaining experience and learning the right mentality to race a three-week race.

"That's the biggest difference between a one-day rider and a three-week rider, and then physical talent for one-day racing also doesn't always transfer to three weeks," he said.

"It's not that you can't still go for one-day races while going for the Grand Tours," continued Evans, who also won the World Championships road race in 2009 and Flèche Wallonne in 2010, "but a one-day rider is 110 per cent 'on' for that one day – for Paris-Roubaix or the Tour of Flanders – while a Grand-Tour rider has to sit for three weeks at 80-90 per cent of capacity and switch on to 100 per cent at key moments.

"But to keep that consistency for three weeks – as opposed to for one day – that's where I see the mentality of it, and not all riders have the capability."

'Riders are perhaps conditioned by the environment they've grown up in'

Dutch rider Mathieu van der Poel (Alpecin-Fenix) is also a rider who's impressed Evans – and Eddy Merckx, who recently said that he thought the 25-year-old was capable of winning the Tour de France one day. Three-time cyclo-cross world champion Van der Poel took the biggest road win of his career at the Amstel Gold Race in 2019.

"Coming from cyclo-cross, Van der Poel seems to have that one-day-race mentality," said Evans. "Riders like him are perhaps a little conditioned by the environment they've grown up in – that people want him to win Amstel Gold, or Roubaix or Flanders. He'd have to change his body type – to lose some muscle mass, which would compromise his current finishing speed – if he wanted to target Grand Tours."

Asked whether the likes of Van der Poel and Evenepoel – who both live in Belgium – would need to move to more mountainous areas if they wanted to mount serious bids to try to win Grand Tours in the future, Evans said that it would certainly make it easier for them.