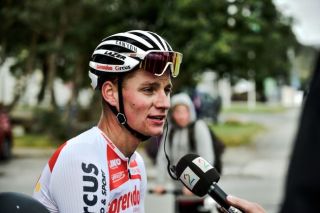 The Dutchman will instead take part in the Sparkassen Münsterland Giro on Thursday.

"In this way, we avoid additional burden for Mathieu with another race on a different continent and obviously another jet lag," the team said.

"We would like to give Mathieu the chance to end an excellent road season in a nice way."

Van der Poel was one of the top favourites to win the UCI Road World Championships elite men's road race last week, but after making the winning breakaway, the 21-year-old cracked and was dropped.

After Thursday's race, Van der Poel will take a break before launching into the cyclo-cross season as reigning world champion in that discipline.

In 2020, he aims to compete in the Summer Olympic Games in cross country, and has curtailed his road ambitions until after the Tokyo Games.

Despite racing a limited road schedule and mixing in World Cups on the mountain bike after a full cyclo-cross season, Van der Poel still had a remarkable road season, winning the Amstel Gold Race and De Brabantse Pijl, the Tour of Britain, Dwars door Vlaanderen and GP de Denain - a total of 10 wins in 29 starts.