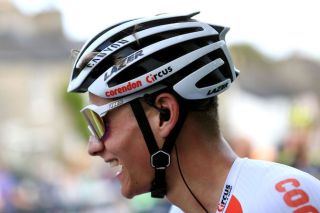 Mathieu van der Poel’s (Corendon-Circus) cyclo-cross season has been pushed back, with the 24-year-old now scheduled to start his campaign at the Telenet Superprestige Ruddervoorde race on November 3. The 2019 Amstel Gold Race winner was originally down to take part in the Kiremko Nacht van Woerden on October 22.

After combining a number of disciplines this year, Van der Poel has already altered his end of seasons plans once. At the start of October, he decided to skip the mountain bike Olympic Games Test Event in Tokyo.

Van der Poel has raced 31 days on the road in 2019. Along with his Amstel Gold Race victory, he enjoyed a stellar second half to the campaign that included a win in the Arctic Race of Norway, three stage wins and the overall at the 2019 Tour of Britain and a stint of other impressive performances.

In September, he was one of the key favourites for the men’s elite road race at the UCI Road World Championships, and despite making it into the key break on the final circuit he cracked in spectacular fashion to finish 43rd in Yorkshire.