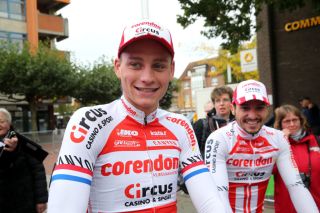 Mathieu van der Poel has stated that he wants to make his Grand Tour debut at the 2020 Vuelta a España. The Dutchman will ride the Classics in the spring before targeting gold in the mountain bike event at the Tokyo 2020 Olympics, but he is keen to return to the road after his return from Japan. The cross-country race takes place on July 27, while the Vuelta gets underway in Utrecht on August 14.

“The focus is on the Olympics,” Van der Poel said on Sunday, according to Sporza. “Tokyo is my big dream and after that, a Grand Tour is the big and new challenge. I want to go to the Vuelta.”

Van der Poel will remain with Belgian Pro Continental outfit Corendon-Circus in 2020, which means his team will have to rely on a wildcard invitation if they are to be on the start line on August 14. Their prospects seem strong, however, given that the 2020 Vuelta begins with three stages in the Netherlands.

“That is a concrete goal for our team,” Corendon-Circus manager Christoph Roodhooft told NOS, though he said that the squad would likely need to expand its roster from 20 to 25 riders. “That is the intention. Whether it will all be settled is still a bit of a wait.”

Roodhooft said that the Tour of Flanders and Paris-Roubaix would be Van der Poel’s key objectives in the spring, and he is likely to bring a temporary halt to his road campaign following Amstel Gold Race in order to turn his attention to mountain biking.

“In principle, he will rest a while and then ride his first World Cup in May," said Roodhooft.

Van der Poel won Amstel Gold Race, Dwars door Vlaanderen, Brabantse Pijl and the Tour of Britain in 2019, and he also placed 4th in his debut Tour of Flanders. He also sparked the winning move at the Road World Championships in Yorkshire only to lose contact on the final lap. The Dutchman also claimed the cyclo-cross world title, the cross-country race at the European Mountain Bike Championships and three rounds of the MTB World Cup.

On Sunday, Van der Poel made his first cyclo-cross appearance of the 2019-2020 campaign at the Ruddervoorde Superprestige, where he took victory ahead of Laurens Sweeck.