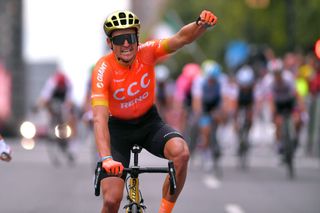 CCC Team's Greg Van Avermaet will try to peak slightly later than he has in recent years in the hope of being at his best for the biggest spring Classics in 2020, and will do so by beginning his winter training later than usual and by changing his early-season race programme.

Van Avermaet: I might not win a Classic this season but I have no regrets

According to Het Nieuwsblad, Van Avermaet has spent the past six weeks away from his bike, having last raced at the World Championships road race in Yorkshire on September 29.

Since 2010 – apart from in 2012 – Van Avermaet has ridden the Tour of Oman as his second race of the season each February, preceded by the Tour of Qatar until the race's demise after the 2016 edition, and since then by the Volta a la Comunitat Valenciana in Spain, where he took a stage win last year, and won the team time trial as part of the BMC squad in both 2017 and 2018.

However, the Belgian is set to drop the Tour of Oman in favour of staying in Europe for the start of the 2020 season, although Valenciana is still likely to be his first race, potentially followed, according to CCC sports director Valerio Piva, by the Volta ao Algarve in late February.

After breaking his ankle in a training accident on his mountain bike in November 2016, Van Avermaet subsequently enjoyed what Piva called "his best-ever spring" in 2017, when he won the Omloop Het Nieuwsblad and finished second at Strade Bianche in February and March, and then won the E3 Harelbeke, Gent-Wevelgem, took second at the Tour of Flanders and won Paris-Roubaix in the space of just over two weeks between late March and mid-April.

"We now want to simulate that," Piva told nieuwsblad.be on Wednesday. "In consultation with his trainer, Max Testa, we decided that he should rest for a long time and slowly start again.

"Greg knows the importance of resting, but he's just so driven and has the kind of temperament that makes him forget that he's supposed to be resting. We want to prevent Greg from getting into shape too quickly, so that he can peak at the Classics," he explained.

"I sometimes walked a bit, but it was very much the intention to take a long break and to completely reset my body. I needed it after a tough season," the Olympic road race champion told nieuwsblad.be. "But I mustn't hurry; it's still more than three months until the Omloop Het Nieuwsblad."

Van Avermaet will apparently head to CCC's December training camp in Spain a week earlier than his teammates in order to then head home a week earlier so that he's back in time for the birth of his second child.

He will then – "according to our preliminary schedule", said Piva – do an altitude training camp in Tenerife in early January, which will be a first for Van Avermaet during the off-season, although he also trained at altitude for the first time since 2013 ahead of this year's World Championships.

"Greg has always been very good during his first races in early February in recent years, but they should actually be preparation races. In 2019, he was very good at the Classics, from the Omloop Het Nieuwsblad to the E3 Harelbeke [BinckBank Classic], but after that he fell a little bit quiet," Piva said, with Van Avermaet finishing 10th at Flanders and 12th at Roubaix this year.

"Thanks to this new approach, we want to prevent him from getting back into shape too early."