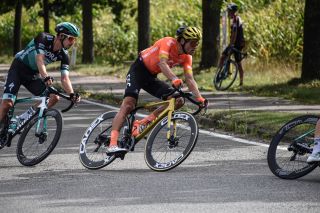 The lead in the ranking changed several times during the season with Oliver Naesen (AG2R La Mondiale), Alejandro Valverde (Movistar) and Van Avermaet all taking the lead at various points in the year. However, with a consistently strong end to his season, Van Avermaet pushed clear of his rivals thanks to a win in the Grand Prix Cycliste de Montreal and third in the Grand Prix Cycliste de Quebec. The Olympic Games road champion also finished second in Clasica Ciclista San Sebastian and sixth in the Bretagne Classic  - Ouest France.

"I’ve always said that I am not a rider who wins twenty races a year but I am always up there in every race and hopefully, I can get a few really nice wins throughout the year. I missed a big win during the Classics this year which was disappointing but these are really hard races to win and it’s not enough to just have the legs, you also need everything to go right and a bit of luck. I think if I had won one of the Classics, my season would look very different. That’s why I was so happy to win in Montreal. After coming close to a big win throughout the year, it was a good reminder that I’m still capable of winning," Van Avermaet said in a statement released by CCC Team.

“I’m happy to finish the season at the top of the UCI One Day Race World Ranking. I think it shows what kind of rider I am and my ability to contest most of the one-day races in the calendar. I’m motivated to continue like this in 2020 and convert some of those podium places into victories.”

Van Avermaet led the line for CCC Team throughout the campaign and was the squad’s focal point during both the Spring Classics and the Tour de France. He finished second in Omloop Het Nieuwslblad and third in E3 BinckBank Classic but missed out on a major win until Canada in September.

“Greg Van Avermaet is one of the best and most consistent Classics riders in the world and finishing the season at the top of the UCI One Day Race World Ranking proves that. Greg is a fighter and every time he lines up at the start line, he’s lining up to fight until the finish line. Greg may not have secured a big win in the Spring Classics this year but he was up there in almost every race and his convincing lead in this ranking over some riders who won multiple one-day races is an acknowledgment of this,” Ochowicz said.

"Greg’s win in Montreal was an important one for Greg, the team, and our sponsors, but it’s easy to forget a rider’s result if they are not standing on the top step. Greg delivered some great performances with second place at Omloop Het Nieuwsblad and Clasica Ciclista San Sebastian, and third place at E3 BinckBank Classic and Grand Prix Cycliste de Quebec."

CCC Team has strengthened in the off-season with the signings of Matteo Trentin (Mitchelton Scott), Jan Hirt (Astana) and Ilnur Zakarin (Katusha). The team were negotiating a deal with Rohan Dennis but the Australian is now expected to sign with another squad.